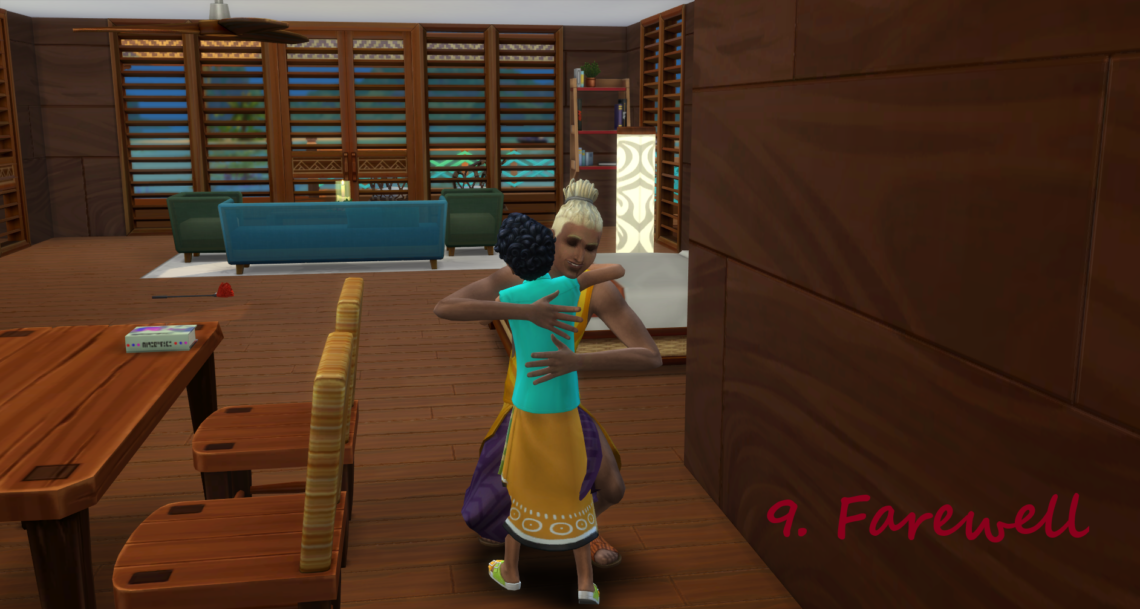 The festivities are approaching and today it’s time for readers to say farewell to a very loving family and their unique miracle of a son.

Soon all the neighbors arrive at the house.

Everyone wants to greet Keoni and congratulate him on his thirteenth birthday.

Keoni is too young to drink kava, but Akia makes a toast with the guests and smiles proudly at his son.

After the neighbors have left, Keoni enters his room and through the window he sees a cloudless sky….
Damn! It’s going to be another crap day inside.

Akia has gone fishing and the rest of the family seems to be having a good time.

Keoni sits down and plays at the dollhouse with Nalu.

Even though Keoni does not go to school, he still does his homework.

As the evening darkness descends, Nalu and Keoni jump into the sea.

After the swim, Keoni runs up the shore.

Keoni loves his family, the sea and the fresh air of Sulani …

… but now Keoni has heard of a land where the sun almost never shines.

Keoni has become a teenager and now he is saying goodbye to his family.

He is a healthy and strong kid and he is ready to find his own way in life.

This is the end of a short story about a long-awaited child who for his parents will always be a blessed unique miracle.

The story was originally written as a prelude to a challenge about a teenager’s struggle to fend for himself.
I fell completely in love with Keoni while writing his story in the Danish forum and he has forever changed my perception of vampires in Sims4.
Before they were just disruptive bloodsuckers and now I have discovered they have a lot of cool abilities.

Finally, I wish all my readers a Happy New Year! 💖 🎉
No one knows the future but hopefully 2021 will be far less stressful than this year.