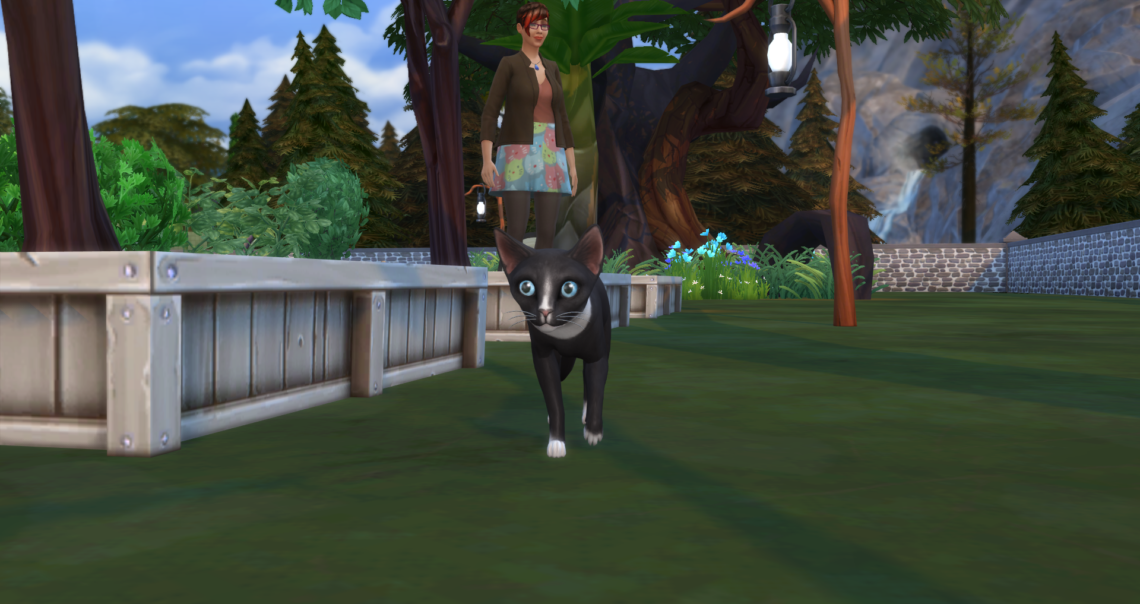 We see a lot of Trix in this episode and I will not promise that it will happen again. Tusnelda has got a new idea and it is not always easy for a cat to follow in the footsteps of a human.… well, we’ll see how it goes.

Tusnelda is in the process of harvesting her herbs and vegetables.

She looks with satisfaction beyond her crops.
Since Flora’s daily visit, the quality of the crops has increased to near perfection.

Trix is on his usual morning round. He keeps a watchful eye on everyone in the area, but right now everything looks peaceful.

Tusnelda keeps a watchful eye on the well-being of the plants and she takes notes of everything she observes.

Hm! There is more than enough for her own household needs …. she should be able to take advantage of this abundance of harvest.

Trix scans the area for the last time….

… Now his hunger is calling and he knows where he can satisfy its demands.

He stops and observes the mailbox, but it does not appear that there have been any disturbing visits today.

Just then, Tusnelda goes to work.

It does not take all day to eat and Trix is preparing for a long wait. There are still many hours until Tusnelda gets off work.

Some of the time he can use to sharpen his hunting technique and this ball seemed to be obvious for the purpose.

Grrr! Take it, you villain!

Well! It thinks it can put him down !?

He must show it who is the strongest.

Eventually he gets the ball tamed…

… but the excitement still sits in his body and makes him run around at high speed.

Later in the evening, the crops are ready to be harvested again.

This time they are all sold. Now Tusnelda wants to raise money to move on in life.

As usual, Flora comes by when it’s evening.

Tusnelda is always very happy to see her friend.

Tonight Flora gives her a present.

Tusnelda is very surprised when she receives a special seed.

As always, Flora and Tusnelda exchange their experiences of cultivation and Tusnelda learns a new recipe for herbal ointments.

As Flora gives her full attention to the plants, Tusnelda retires to the mine.

It’s time for her to have a late dinner.

Trix watches her from a distance.

Finally, it seems that Tusnelda becomes aware of his presence…

…. and his need for a full food bowl.

Flora has finished fertilizing the plants and goes home.

It’s still night when Trix wakes up from his sleep.
Where is Tusnelda?

He finds her in front of the TV.
Tusnelda is fully occupied with her own thoughts and does not have time for Trix right now.

Now she is again engrossed with the Chefs Contest.

“I guess I might as well run away from home” Trix hisses angrily…. Tusnelda will probably not discover that he is missing.

Finally he gets Tusnelda’s attention when she asks what’s bothering him?

Ha! Your attention did not last long, Trix thinks sadly, as Tusnelda’s eyes again seek the contest on TV.

It ends with a compromise as Tusnelda takes Trix in her arms.

Well! It’s probably as good as it can get.

When the Chefs Contest is over, Tusnelda finds her shower in the garden.

As always when Tusnelda has seen the Chefs Contest, she feels very inspired.

This morning she is making a delicious spinach omelet for breakfast.

Trix moans loudly. Tusnelda has not given him any special attention in the last 24 hours and he longs for a little cuddle and to play with the fun feather duster as they usually do.

Tusnelda bends down and scratches him behind the ears. She promises him that it will soon get better but just today there is something important she can not postpone.

Tusnelda has traveled to the Magnolia Promenade. Here she finds a small worn out shop. A store that in the past has sold some mysterious effects. Now the owner has given up the business and put the store up for sale.

Tusnelda looks around the room. This is exactly where an initiative woman like her is needed. Here she can sell her ointments and herbal medicines.
Tusnelda knows nothing about running a business, but the decision has been made.

When Tusnelda returns home, she sends a signed contract.
She has found a way out of poverty. Now she has to make money, lots of money.