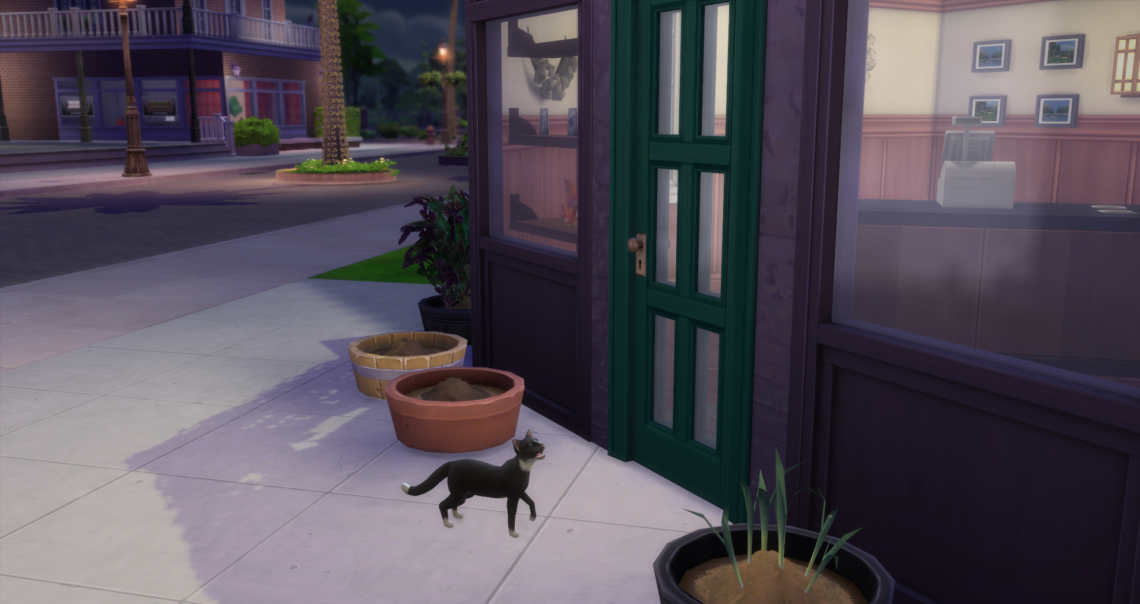 Today Tusnelda opens her shop but unfortunately the sale may not go quite as she had hoped.

Tusnelda’s work in the cooking industry is going really well and she has just been promoted once again.

It’s late afternoon when she gets home and she casts a quick glance at the crops on the way to the shower.

Flora comes by and fertilizes the plants as she does every afternoon.

Tusnelda welcomes her friends with a family hug.

She tells Flora about her shop and about her plans for the future. Flora seems very excited about the idea.

Trix howls loudly. Tusnelda is so absent all the time and now he needs some food.
Tusnelda says good night to Flora. She wants to go to bed early because tomorrow awaits an exciting day.

Next day, Tusnelda does not have to work in the restaurant so it is the perfect opening day.

She has planted a small selection of herbs outside. Green is healthy for the eyes and maybe she can sell a cutting or two.

Trix chooses to explore the new area. There are many new exciting scents to be analyzed.

Tusnelda washes her hands in the shop’s small toilet.

In the meantime, we take a look at a small back room that is sparsely decorated with furniture from a flea market.

Everything is ready and Tusnelda welcomes the first customers.

She asks for customers’ wishes and offers homemade garlic vines, herbal cream and rare insects from the forest.

The customers seem interested and positive … but yet no one has bought as much as a single jar of cream.

It’s afternoon. Trix has researched the entire neighborhood and now he needs a rest.
He looks skeptically at the many customers in the store.

He hurries past the crowd…

… and he manages to slip almost unnoticed into the back room.

Finally, it seems that Tusnelda has found a customer willing to buy.

It turns out that two customers want to buy the special seeds that are delivered in her mailbox.

She serves them quickly and efficiently.

Trix has gradually realized that the customers seem peaceful and he ventures into the store.

Tusnelda seems to be pretty busy so he might as well take a nap.

The atmosphere is nice …

… and Tusnelda bids her goods to the best of her ability.

It’s time to go home and she says goodnight to the last customers. Now she just needs to remove the signs from the items sold.

Tusnelda looks sad at the counter. She has been working all day and she has only sold two small bags of seeds.

Trix looks at her wondering … there is so much he does not understand.

It’s completely dark before they get home.

Tusnelda finally speaks to Trix …. “I’m so tired and in that way it’s going to take many years before we can move”.

Tusnelda can not hide her disappointment. How is she ever going to make enough money.

Trix stands for a long time and wonders about Tusnelda. She looked so sad but why!? What did she mean by moving?

Sad and tired, Tusnelda drags herself down the corridor.

Even the food tastes boring tonight.

Trix, on the other hand, purrs contentedly with life. His food is just as crunchy and delicious as he prefers it.

But Tusnelda never hears his satisfied purring.
She has had a very exhausting day.