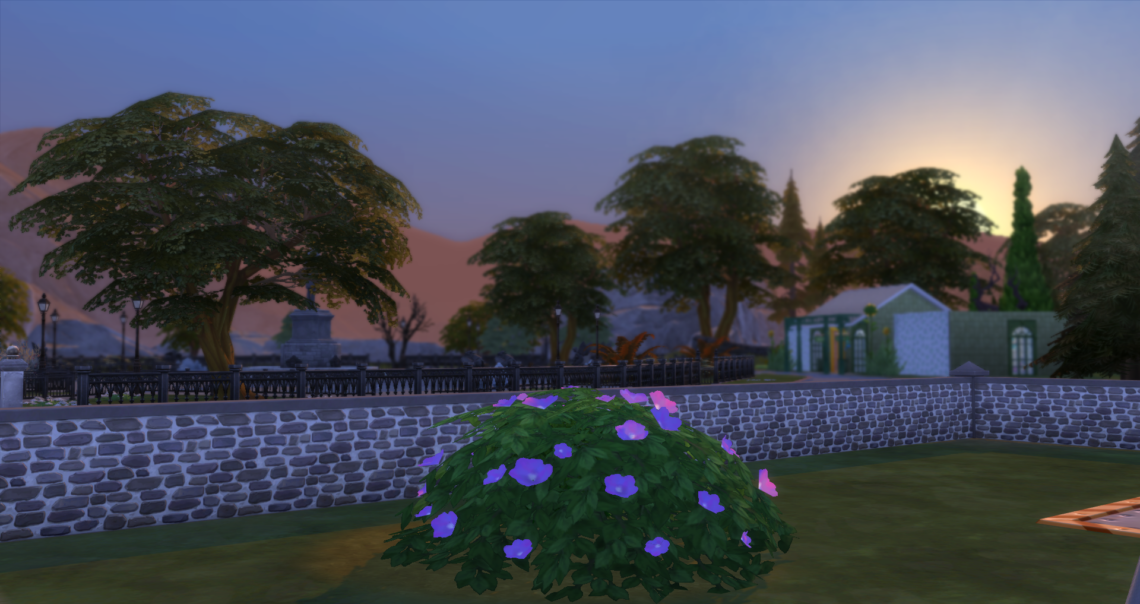 Today’s episode offers some surprising experiences and a prediction that Tusnelda can not take very seriously.

It’s abnormal for Tusnelda to sleep longer than Trix but she’s not easy to wake up this morning.

Ugh! She still seems to be in a bad mood

Trix still manages to persuade her to play a little.

Tusnelda goes out to take a shower. It’s a nice sunny morning but Tusnelda is tired and depressed.

She turns on her TV as usual to watch the Cooking Contest.

There is nothing like an exciting food program to eliminate bad moods. Maybe it will be a good day anyway, says Tusnelda and gives Trix a hug.

No day without challenges and now there is a water pipe that needs to be repaired.
Tusnelda has just finished when Flora calls and asks if Tusnelda wants to join her at the Sakura Festival in San Myshuno.

Tusnelda has never been to Sakura Festival before and she curiously pours herself a glass of Sakura Tea.

The tea is tasty and fills Tusnelda with small happy bubbles. She buys some small souvenirs and a beautiful festival t-shirt with a cherry blossom print.

Flora has immediately found the herbs but Tusnelda wants to explore more of the festival’s activities.

Tusnelda seeks out the Guru to ask him about her future.

He looks at her seriously and says that no one can do without love, but his predictions fill her with wonder. Tusnelda is a noncommittal and in addition she has a very busy working life. What silly joke.

Wow! Sakura tea has a very powerful effect on some of the festival participants. The woman is obviously flirting and she is definitely not Tusnelda’s type.

Flora responds kindly to all inquiries but does not allow herself to be lured away from the plants.

It seems that the Sakura tea has begun to influence Tusnelda’s behavior when she suddenly, in a fit of rage, throws a large handful of petals over a handsome tall man.

Tusnelda quickly comes to other thoughts and seeks out the food stall.

After the meal, Tusnelda seeks out Flora to tell her about the day’s many exciting experiences

She is telling Flora about the Guru’s predictions and she encourages Flora to give it a try…. Suddenly she becomes aware of a stranger who has approached.

Flora blushes and giggles shyly as she sips a glass of Sakura Tea.

Tusnelda has succeeded in getting Flora to seek out the guru.

Yup! The guy is definitely interested in Flora….
Tusnelda cheerfully leaves them to their further fate as she once again seeks out the food stall. She has time to taste another dish.

Tusnelda sits and ponders what the Guru might have meant by his prediction. Here are not many tall dark men in sight …. and besides, she is not interested in a boyfriend.

I should not be able to decipher what he meant either, but there is definitely someone watching you Tusnelda!

Tusnelda seems overly loving as she comes home and encourages Trix to jump up in her arms.

Trix sniffs cautiously at her … She seems to radiate a strange pink glow.

Tusnelda does not feel tired at all so she sits down in front of the TV.

I should not be able to say whether it is the influence of the Guru or the Sakura Tea, but tonight it is not the usual Cooking Contest that catches Tusnelda’s interest.
New emotions are aroused in the depths.