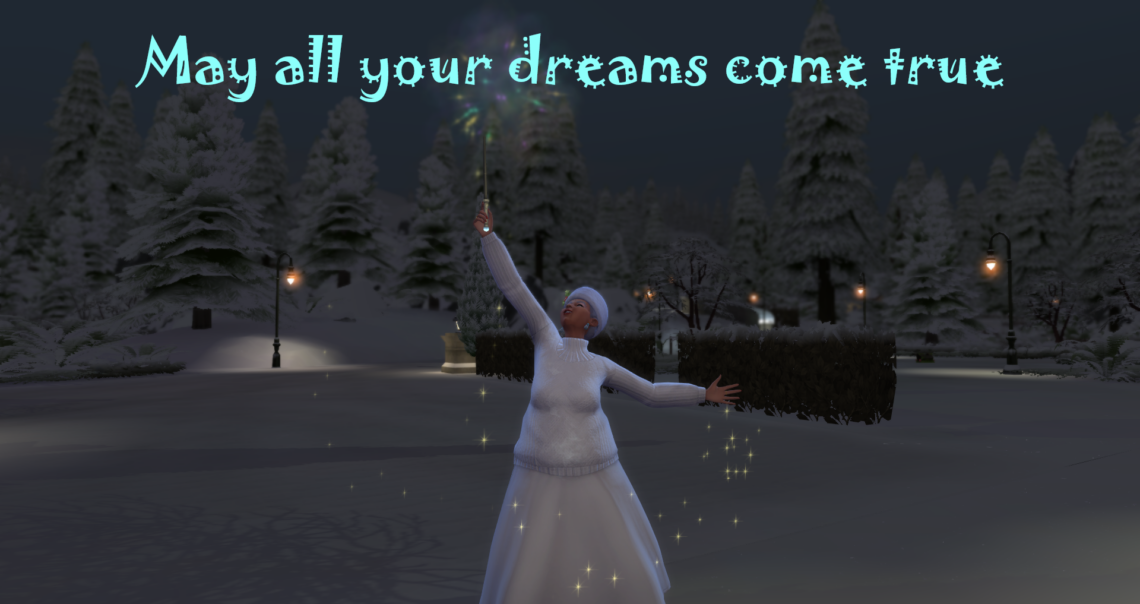 This is the start of a short Christmas story in six acts, inspired by Tusnelda and Trix Universe.
In this first part of the story, we meet Magic Star, an older fairy who has certain similarities with me…. among other things, a habit of speaking out loud to ourselves.
Magic can do magic and she can make dreams come true. The question is whether she is quite as skilled as she herself thinks? This will be revealed throughout the story.

“Let me introduce myself. My name is Magic Star and I am a fairy. One of those who can make dreams come true.”

“Right now we have reached the time of year I love most and I have started on my winter decorations.”

“A beautifully set table with candles helps to create the right atmosphere.”

“My specialty is fulfilling wishes with my magic wand, added a little bit other manipulations….. I will admit, magic, after all, consists mostly of glare.”

“There is nothing wrong with glare as long as it fulfills its job! …..In addition to the glitter I can make some very effective elixirs.”

“I can fulfill all dreams … even those you have not dreamed yet.”

“I love winter, especially when the snow lights up the whole world.”

“When it’s cold I enjoy sitting in front of the fireplace and thinking back on good times. I’m an older fairy now so I have so many fond memories.”

“There are no strenuous work tasks in the garden, so there is plenty of time for quiet pursuits like knitting or embroidery.”

“I love writing fairy tales and I often find inspiration in reading interesting stories from unknown places in the Sims world.”

“A fairy is needed immediately!”

“Oh Liva, something has happened that requires a fairy … I have to run instantly!”

“Hurry Magic! The new year is near!”

“Oh! I love this transformation.”

“Simeon! I have terrible news…I have discovered a world without seasons!”

“No seasons!? Are you sure Magic!?” Simeon replies in surprise

“Absolutely sure!, I’m older lady, but not blind”.

Take it easy Magic! We will find a solution ….. I will just have to discuss the problem with the other sages.

“Hey Morgyn. Did you get the news?”

“I can understand that you have found an imbalance in another world, Magic?
The question is whether it requires any intervention?” Morgyn asks speculatively.

They are interrupted by a cough! “Did anyone mention my name?”

“Oh! Hi Santa! It’s Magic Star who has found a world without winter and she thinks it requires our intervention,” Morgyn answers ….. “except, think about this…. In Australia, they celebrate Christmas in the summer, so this should not cause any problems.”

“This is not about Australia!” exclaims Magic…. “This is about some neglected Sims in Brindleton Bay!!!”

Magic gets up quickly and leaves the conversation.

“Goodbye now! I need to make my preparations and I will start with some shopping.” she says already moving on.

“This makes an old man worried. I wonder if Magic is right? Do they really have no knowledge of Santa in Brindleton Bay? “

Magic is already on her way across the magic realm while talking loudly to herself.

“What a breathtaking sky! I love the world of sages … almost as much as I love snow.”

“When I was a young fairy I preferred to fly … but unfortunately my wings do not carry me that well anymore.”

“There is only a short way back now.”

“When the wings do not carry, one must resort to other methods.”

“First of all, I need a good solid broom!”

“Now for the ingredients for the magic potions.”

“Hello my dear ghost, I need to make some long lasting magic elixirs …. will you find the necessary ingredients for me?”

“Now back to headquarters! … I just need to freshen up some forms.”

“I’m so happy that I who is an older fairy can still keep up with the youth! “… “I can still handle a magic wand better than most!”

“This was nice. What an enchantingly wonderful visit to the magical realm … now I have to move on in my preparations.”

Magic begins to make an elixir while still chatting loudly with herself.

“Now an effective magic elixir must be created”…

“Ah! What an intoxicating scent … this elixir is going to be absolutely magical….”

The scent is devastatingly disgusting and Magic faints and falls to the floor.

Some time later, she wakes up dazed.

“Come on Magic! Pull yourself together!… It ain’t over till the fat lady sings.”

With a quick spell, the cauldron is cleaned.

“I guess it did not work so well, but every cloud has a silver lining.” says Magic optimistically.

“Do not forget I’m Magic Star and I still have fresh ingredients in stock.”

Magic carries the garbage out….

… and now she sees that she has a guest.

“Do you see Magic, I do not want you put your life on the line.” says Santa seriously.
“The discipline of flying at high speed between parallel worlds is usually only something done by Santa’s.”

“Do not be so conservative Nikolai!” … “In our time teleporting is a discipline women should be able to perform on an equal footing with men.” says Magic in a firm voice.

“But Magic…….” Santa begins to protest.

“Enough about that! Teleporting is certainly not rocket science!”….”Now I just need to staple this thread.” Magic breaks off.

“I take one last trip to the magic realm to pick up magic elixirs …. my lack of time forbids me to make them myself.”

Magic goes fast through the snow towards the magical realm

The snow is falling close and in her mind it promises her a lucky journey.

“Now to the magic realm!”

When Magic reaches the headquarters, she is received by Simeon.

“I have a gift for you Magic…. With this Glimmer-stone you can always find your way back to the magic realm …. I do not want to risk you disappearing between unknown parallel worlds.”

“Oh! This is so sweet of you young man.” says Magic

“Those young people, they always think that the world has started with them … that they have to teach you everything.” she mumbles to herself.

“Concentration Magic! Now I have to arrange my packed lunch!”

“This Potion of Plentiful Needs will be useful on the trip and it seems to be of perfect quality …. you still have the craft Magic!”

“I hope you will enjoy this drink with me to wish me luck on the journey.”

Magic is so glad to see all three Sages have appeared.

“And you Nikolai! My very special friend. I’m glad you’re supporting my journey after all!”

“Excuse me, but time is running out. I need to get ready to leave.”
“First, I have to fulfill every need.”

Magic looks around one last time after walking through the portal.

“Oh! This is breathtaking.”

Then she sits up on her flying broom.

“Goodbye dear readers I will see you soon on the other side.”