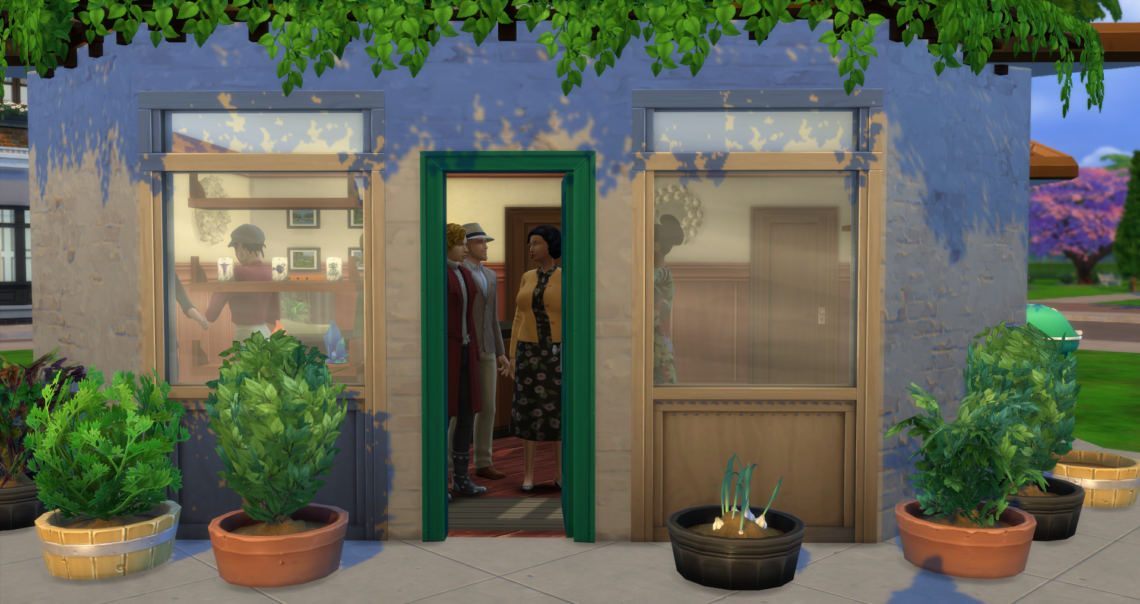 The day starts fantastic for Tusnelda.
Trix is increasingly wondering about her strange behavior and then there is a concern about dark men who have spotted Tusnelda.
Trix tries to help her where he can.

Tusnelda remove a cat hair from her T shirt. Meanwhile, her thoughts return to the Sakura Festival where she bought it. So much has happened since that day.

She does not have time to wonder anymore about her missing waist … she has to open the store.

I’m sorry Trix, but you have to entertain yourself for the next few hours.

Tusnelda starts by looking after the plants. Unfortunately, it does not appear that they can be sold.

Soon she can kindly welcome the first customers of the day.

The first customer has already decided on a purchase.

Here, another of the mysterious seeds from the mailbox was sold.

This is a pure profit as Tusnelda has no cost for new supplies.

A celebrity has decided to buy a garlic wreath and it is done under the supervision of a paparazzi photographer.
Tusnelda grows lots of garlic in the garden so she has no expenses for them either.

Maybe the photographer’s photos can help her get some free publicity?
The day has started quite well.

Suddenly Tusnelda hears the sound of an enticing dark voice … that voice is unmistakable.

Hello, Martin! Welcome to my store…
Please, look around and see if there is anything that may tempt you.

I have already spotted someone who might tempt me says a female customer in a flirtatious voice as she scans Martin from head to toe.
Martin immediately clasps his hands and looks angrily at her. “I beg your pardon!!!”

Is that man always angry?

I’m sorry but I just closed the store says Tusnelda quickly.
I have something important I need to achieve.

Trix does not understand the rapid change of mood. Tusnelda behaves more and more strangely but why should he reject a little cuddle and a hug?

Just as quickly, her mood changes again and Tusnelda loses her interest in Trix.

The guy sends a stream of sweet phrases in the direction of Tusnelda.

Trix might as well explore the surroundings while Tusnelda is chatting.

This bush is definitely too small to contain a squirrel. That’s a shame.

Well do as you please Tusnelda! I do not want to waste my time listening to superficial words anymore.

Tusnelda looks up quickly as Trix disappears across the road….. Maybe she’s considering calling him ….

… but instead she follows Martin into the building.

Trix runs fast on while his still wondering what’s going on with Tusnelda?…

This sudden preoccupation with mirrors and her giggles and sudden mood swings.

After a while, Trix begins to wonder what Tusnelda is doing.

Maybe we should see what happens

Tusnelda stands and admires Martin who has found a guitar. That man has several talents.

Now she walks purposefully towards the bar…

Two young people talking together over a glass of nectar …. it looks pretty innocent.

Trix looks increasingly restless. He fears Tusnelda is guaranteed to get into new trouble.

In the bar, Tusnelda and Martin have found a more comfortable seat.

Tusnelda can’t really find words and she starts to feel a little insecure.

Then she and Martin start talking at the same time.

Trix is considering whether to go into the bar and look for Tusnelda.

On the couch, Tusnelda and Martin have stopped talking.

Trix finally makes a decision…. He is so small and so brave.

Tusnelda and Martin have risen to say goodbye to each other.

It looks like their shyness has evaporated in the air.

Maybe we could go on a date one day? Martin asks hopefully…

She grabs Martin’s hands … Yes please! I would very much like to go on a date with you Martin.

Was it really her who uttered these words? Tusnelda giggles …

Meanwhile, Trix is busy keeping an eye on the surroundings.
He’s obviously the only one who sees the sneaky type and he hisses angrily that he should keep his fangs far away from his Tusnelda.

Fortunately, they are on their way home now.

After giving the villain a clear message, Trix searches for Tusnelda. What is she doing now?

Tusnelda has found a new chair…

… and Martin seems to enjoy her company a little too much.

It looks like their conversation has started all over again and it seems to continue all evening.

Trix finds a comfortable place to sleep. He has realized that the trip home has been postponed for several hours.

A little later he must suffer the presumptuous tort that an elderly woman scolds him for to dirty the couch with loose cat hair.
He sighs resignedly…. Will this day ever end?

Despite Trix’s fears, Tusnelda and Martin have finally left the bar.
Now they stand at the edge of the river to say goodbye to each other at sunset.

Before Martin leaves, he says that Tusnelda is a very beautiful and remarkable woman.

Tusnelda stays behind and watches the last rays of the sun.

The sky and water are shrouded in a soft pink light.

Never before has anyone said she is beautiful.

Tusnelda never really finished her shop and she still has a stock to fill up.
Fortunately, Trix comes as called.

Trix looks intently at Tusnelda. Her eyes radiate with an unknown glow and now she suddenly wants to cuddle again?
She is still behaving strangely but he will never desire another family than her.

Tusnelda is back in her shop and she has just put new bags of seeds on the counter.

As some customers come by, she might as well serve them before she goes home.

Suddenly she hears a sound and he sees a man hissing at one of her customers.
She has once too much met a vampire and now she can recognize the creep on their behavior.

I have closed the shop and I will ask you to leave the room immediately, she says firmly.

This is how Tusnelda closes the store for the second time today without notice.

Back home, Tusnelda is searching for answers on the housing portal. There is not yet a better home she can afford to pay.

Trix is in the garden when he suddenly feels some eyes in the dark….

In the shelter behind a fruit tree, he tries to get an overview of the situation.
Another one of those dark spooky guys who has sought out Tusnelda.

Fortunately, Tusnelda did not respond to his knock on the door …

Goodbye to you creepy guy!

Trix goes down to the mine to see how Tusnelda is doing.

There she lies completely away in her sweet dreams and Trix decides to keep a watchful eye on her all night.

He at least tries to stay awake all night but even a cat needs to sleep. Sweet dreams.