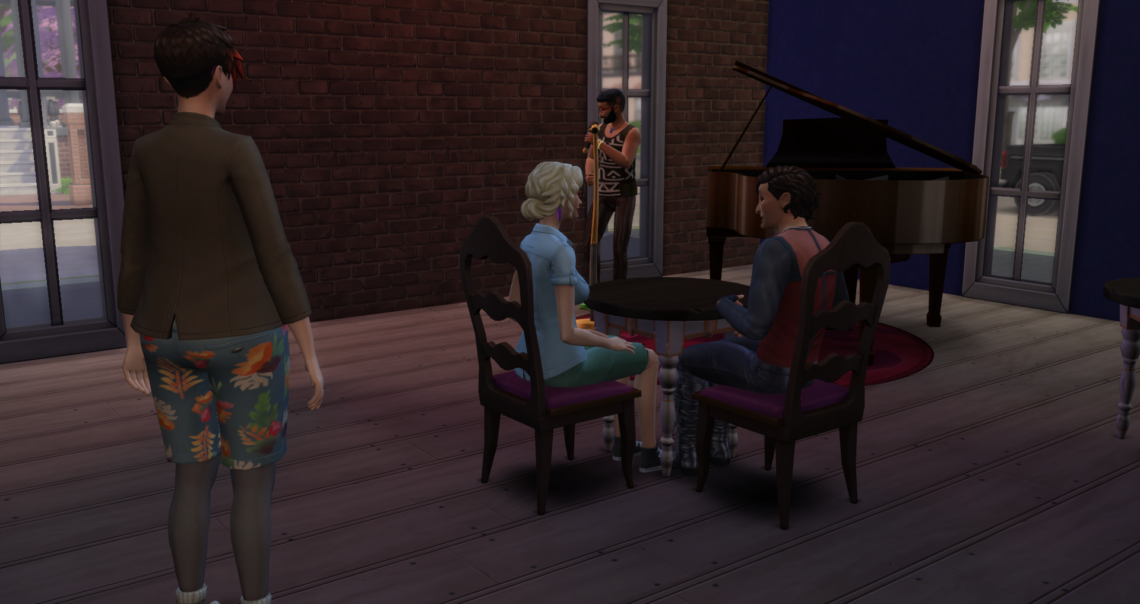 Today Tusnelda and Martin are on a date. It may not end quite perfectly and that is solely due to my inattention. It is difficult to maintain an emotional calm when a foresight shows its power over body and mind. Another question is what Trix thinks about the changes creeping into his home.
This chapter is way too long because I have a hard time finding a natural breakup. Just as I decided to finish, Flora shows up and it causes a completely unexpected turn.

Tusnelda notices a large amount of fluttering butterflies in her stomach when she meets Martin in front of The Blue Velvet.

Let’s go inside and order a glass of nectar, Martin suggests cheerfully.

They are the only customers in the bar as it is still early in the day.

Tusnelda wonders why she has such a hard time finding words … he must think I’m terribly boring she thinks nervously.

She drinks a large sip of her nectar.

In silence, they both take a big sip of their glass.

I wish you two could get it over with so I do not have to witness more fumbling, mumbles a gray woman angrily by their side.
Tusnelda and Martin looks at her in astonishment.

Maybe we should find another place to sit says Martin. A place without meddling townies.

Tusnelda catches sight of a bench in the courtyard and they grab their glass of nectar and leave the bar.

The sun shines warmly from a cloudless sky.

Tusnelda looks at Martin. He is so handsome and very polite.

Martin starts talking about the stupid townies who never have any inhibitions. What makes them think they can interfere in every single conversation.

Wow! Martin quickly jumps up from the seat hit by a restlessness in his body.

Tusnelda looks intently up at the sky as she scouts for stars that have not yet risen. … now he definitely thinks she’s a stupid nut.
Meanwhile, Martin performs several push ups.

I’m so sorry Martin! It was not my intention to embarrass you, Tusnelda apologizes.

His answer came as a big surprise.

Even Martin looks startled, and he quickly jumps back while looking inquisitively at Tusnelda.

Yah, Tusnelda probably thinks she’s okay… but why does everything feel like chaos in her body?

Now they sit on the bench again.
None of them can decide to talk and none of them feel like going. They are as if struck by a paralyzing enchantment.

The sun gets lower when Martin suddenly looks at Tusnelda. Come with me….

Tusnelda sees him go inside and decides to follow him.

Tusnelda stops while she fascinated listening to Martins dark beautiful voice. That man could make a living by singing.

Martin sings a few more songs before setting the microphone aside.

Martin seems uplifted and free as he resumes conversation with Tusnelda.

Here it is that the date comes to an abrupt end and it is only because I have overlooked that Tusnelda is going to work.

Without answering Martin, she gets up and runs away.

Look at him! My heart breaks ….That poor man thinks he’s a big failure.
Up with the courage Martin. I’m sure you’ll meet again.

Already the next afternoon Martin comes to visit.

He has no reason to be nervous. Tusnelda receives him with open arms.

However, it seems that the starry sky once again occupies her more than Martin’s presence.

The silence does not seem to bother any of them.

I should not be able to say what they are talking about but they are enjoying their meal together.

Tusnelda still seems to be preoccupied with the mirror.

In the background, Martin is painting.
Wow! He also has a talent for painting, and he’s pretty good at it.

The painting is finished when he suddenly becomes aware of Tusnelda …. very attentive.

Tunelda hesitates for a moment ….

Her first kiss is a little gentle.

After that, she is more determined.

If anyone has wondered if this tent will ever be used then it is hereby refuted.

The night sky is clear and full of stars and this picture could really be an epic ending to this chapter … but that’s not how it will be.

We’re still missing some pictures of Trix.
Never has he received so little attention and I do not know if it is boredom that makes him examine the mailbox so carefully this night.

Tusnelda asks Martin if he wants to spend the night.
Of course he wants to!

Martin falls asleep immediately while Tusnelda once again enjoys her own mirror image. It’s like she does not quite understand what it is Martin finds so attractive?

Soon everyone is sleeping in the mine.

It’s not like Tusnelda and Martin spend all night sleeping.
Trix looks amazed at the unrest in Tusnelda’s bed.

Stop Trix! This is not something you should get involved in!

There he disappeared into a cloud of hot steam.

To my reassurance, I see the little z in the middle of the bed.

Trix seems to be doing well and he will surely appreciate more space in the bed.

Later, Martin wakes up. He looks so smug.

But Tusnelda loves what she sees.

She herself does not feel any hunger. The amount of love numbs all ordinary senses.

It all sounds very nice, Trix meows, but my stomach is not numb!
Finally, it seems that Tusnelda remembers his existence.

Trix stares intensely at Martin while Tusnelda takes care of his food bowl and his toilet…. Maybe it’s time for you to go home!?
Martin continues to eat unchallenged …. he has no plans to go right now.

This is a lot to process for a small cat brain. Tusnelda never has overnight guests and Trix begins to fear that this guest will not be easy to get rid of again.

In a way, Martin seems very nice and polite….

… and he seems to be quite nice to Tusnelda.
It seems that Tusnelda appreciates him…

But if Tusnelda wants to hear Trix’s opinion then Martin is a very restless bed mate.

So he still knows what a bed is to be used for?
Trix gives himself plenty of time to look at the sleeping man.

Trix really has a lot to process and he realizes that one thing is for sure…. From now on, his life has changed a lot.

Martin collects the dishes everywhere in the mine.

The whole thing is carefully washed up in the sink.

That man is properly raised Tusnelda!

I might be able to stay a little longer before I go to work, Martin suggests.

Tusnelda gives Martin a huge hug and he looks like he has received a valuable gift.

Which he certainly has.

Tusnelda mixes an exquisite fruit parfait. Only the best is good enough.

Martin loves her food like everything else about Tusnelda.

For another short time, they can enjoy each other’s company.

Suddenly, Tusnelda chooses to tell Martin about her fear of committing. Why Tusnelda !?

Martin does not seem to receive that confession further well.

A little later I discover someone crying under the duvet.

Oh! It looks like Tusnelda has broken Martin’s heart.

Martin looks sadly at Tusnelda. I felt what we have together is something very special … maybe I’m wrong?

Tusnelda gives him a kiss.
She realizes that uncertainty may not just be on her side.

You are not mistaken Martin! I think I’m very much in love with you.

Look at him now! A happy man.

Suddenly Flora shows up and she looks far from happy.

Tusnelda gives her a welcome hug.

How glad I am to see you Flora! I kind of need to talk to a friend … if I may ask you a personal question … what do you know about love?

Flora hands Tusnelda a red rose … I’ve loved you since we met in the woods, she answers seriously.

Oh no! Flora! I’m sorry … this is a terrible misunderstanding.

Later, Flora stands a little confused in the garden. What exactly was Tusnelda asking her?

Down in the mine, Martin has collected the garbage.

Tusnelda sits in deep speculation on the couch. How could she be so blind? How can she be so stupid!?

That man is something very special.

I suddenly discover that Tusnelda is crying while her tears running down her cheeks. I’ve never seen her cry before.
What’s up Tusnelda?

I find the reason in a message saying that Martin has to go.

Poor Tusnelda! She never wanted this to happen.
Now she has lost the willpower over her own body and mind. All because the power of a stupid prediction.

Cheer up Tusnelda! I’m sure you’ll probably find your way…. and Martin? He will definitely return.