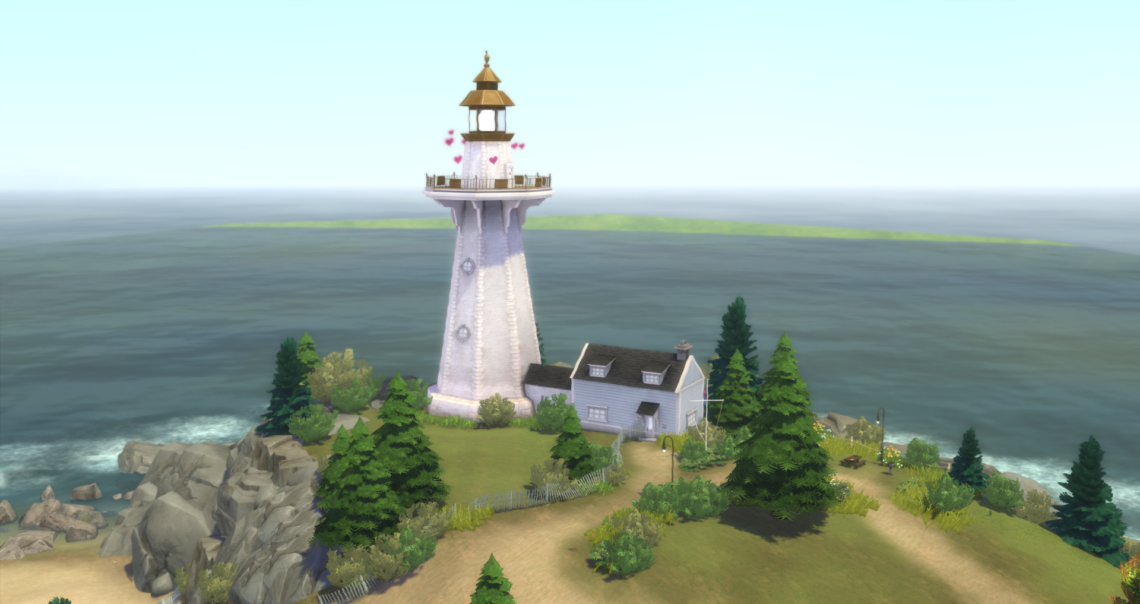 Today, Tusnelda discovers that she is not at all the woman she thinks she is. We learn that Tusnelda loves sweet desserts and Trix discovers that life contains more changes than he likes.

Tusnelda has just been released from work. She pauses for a moment in her garden and assesses the quality of her crops. The harvest is good and she can put a large sum of money aside daily.
Once she has collected 50,000 simoleans, she can establish Trix and herself in a better house.

Hey Trix! Have you had a satisfying day?

Sweet Trix. I have such a nice surprise for you today says Tusnelda.

Yah! We have some play time!
You throw this ball and I run after it and catches it, purr’s Trix excited.

It should soon turn out that Tusnelda has something else in mind and it’s obviously happening by the stove.

Tusnelda has got a brilliant idea. She does not benefit from consuming so much delicious gourmet food. Now she has made a gourmet dish for Trix instead.
That way, she can continue to train her skills without gaining weight.

Quack! Trix looks at Tusnelda with a terrified look in his eyes …
Should I eat this disgusting mass? ….What have you done with my delicious crunchy crispy food?

Trix is not a supporter of all these changes.

After some time of deliberation, he decides to taste a careful bite.

Tusnelda looks at Trix with satisfaction. I am pleased that the food tastes you.

After the meal, Trix playfully chases his own tail.

… and she’s sure these flambéed vegetables will taste divine.

Trix is full and satisfied fallen asleep on the kitchen counter.
It suits Tusnelda perfectly because she has an appointment with Rasmus.

Rasmus has agreed that he will train with Tusnelda in the large gym in San Myshuno.

Tusnelda starts with great determination on the treadmill.

However, the treadmill does not prevent all her confused thoughts from appearing.
She had a wonderful date with Martin but what now?

She’s not a woman who wants a steady relationship … but should she contact him?
Does Martin even want to meet her again?
Why is everything so confusing and why does she have this restlessness in her body?

Maybe she should try talking to Rasmus.

I’m sorry to interrupt your training Rasmus but do you have time to listen to a problem? Tusnelda asks hesitantly.

They move on to Planet Honey Pop in the Fashion District and actually Tusnelda’s recent memories of this area are not so pleasant, but the atmosphere in the karaoke bar is cozy.

Right now, Tusnelda most needs a friend who wants to listen.

Later, when Tusnelda is on her way home, she passes a food stall.

She’s hungry on top of the flambéed vegetables … and besides, she feels so empty inside.

Right now, a cupcake with a thick layer of sweet pink icing is just what she needs.

What a sweet satisfying consolation.

Next morning in Brindleton Bay

Martin is doing his daily workout routine on the treadmill.

Rasmus is standing by the stove grilling a cheese toast while he thinks about the conversation he had with Tusnelda yesterday.

Rasmus has just got a job as a kitchen assistant and he still has a lot to learn.

He should talk to Martin ….

That’s exactly what he decides to do after eating his toast.

Martin catches sight of Rasmus as he sits staring indecisively into the wall.

Do you have a problem Rasmus?

No! I leave the problems to you, Rasmus answers, and I really think you should talk to Tusnelda.

Tusnelda has just brewed a fresh cup of coffee.

She still feels strangely unable to focus and The cooking contest does not seem appealing today.

She has just emptied the cup when she receives a text message.
It’s from Martin…

Did he just send her a heart?

Martin holds on to both Tusnelda’s hands as they later meet in front of the lighthouse.
He looks her straight in the eye … Thank you for coming, he says in a mushy voice.

You want to show me something? answers Tusnelda.

Pink stars twinkle in the sky. Never before had Tusnelda been so close to heaven as now.

Did she even noticed the sea?

I hope you like grilled fruit she says to Martin.

Grilled fruit is my favorite food when made by an adorable chef like you Martin says cheerfully.

Today the air is clearer and more blue than it has ever been before.

In the afternoon, Tusnelda and Martin move on to an old inn in Windenburg.
They have so much to talk about.

It is past midnight when Martin follows Tusnelda home and she immediately invites him to spend the night.

Even deep underground in an abandoned mine, the twinkling pink stars illuminate the darkness of night.

Martin wakes up early in the morning and he immediately starts training.

Later, Tusnelda gets up and makes breakfast while Martin does the dishes.
He always finds some forgotten dirty plates around the mine.

While sitting and enjoying themselves together over breakfast, they already look like a couple.

Now for the dessert …. It seems that Tusnelda has got a penchant for sweet desserts.

Martin is going to work and they will soon have to say goodbye to each other.

Maybe you could drop the job today, says Tusnelda hopefully.

No, that’s probably not a good idea, Martin replies.

I tickle you until you say yes says Tusnelda laughing.

Stop it woman! It does not help you Martin howls desperately.

Finally, the laughter is over and Tusnelda and Martin are saying goodbye to each other.

Trix looks at them from a distance.

Now the crying and tears will probably start soon.

He is very surprised when he sees Tusnelda and Martin cheering enthusiastically.

Tusnelda jumps high into the air filled with joy.

Martin promises to come back after work and while listening, Trix perceives the word boyfriend…!?

It sounds suspicious and Trix understands that “boyfriend” brings Martin into a completely different category.
Trix does not like all these changes.

Martin has gone to work and Tusnelda encourages Trix to play.

Nah Tusnelda … I’m not really in the mood for play.

Tusnelda looks wonderingly at Trix.
What happens? He always tends to love this red feather duster?

Trix looks at the photographs on the wall.

Now Tusnelda is also looking at the pictures of her friends while she thinks about how suddenly her life has changed.

Tusnelda’s gaze turns sadly towards Trix….. He is not at all happy about these changes.

Trix looks at Tusnelda.
Ok Tusnelda …. I guess I can get used to these friends and your boyfriend Martin, as long as you do not completely forget tiny me.