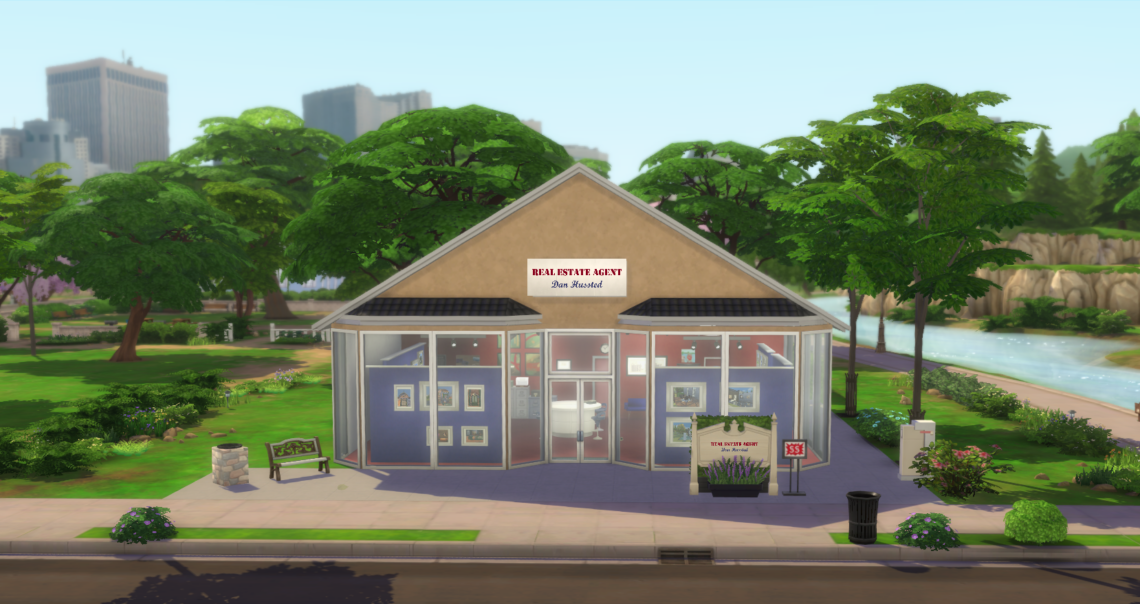 If you ask Tusnelda she will say that life is amazing. She has got a boyfriend and soon even bigger changes are on the way.
Trix, on the other hand, is depressed. There is always so much unrest when Martin comes to visit and in fact his biggest wish is that it will all disappear again.

It’s early in the morning when Tusnelda opens her shop.

Her chefs job is well paid and now she has got a bit of a profit she can invest in a new products for the store.

Now she just hopes her customers will feel like buying them.

She welcomes the first buyer and encourages her to research the new items.

It quickly turns out that the new products are attracting lots of new customers.

In addition to the usual rare seeds, it is the wall decorations that sell especially well.

After a long day, there are still customers who want to buy in the store, but Tusnelda still chooses to close.
There’s someone waiting for her when she gets home.

Tusnelda waters her crops while thoughts flow. She has not seen Flora for several days. She really does not hope she has become too upset.

Rasmus has not heard from Tusnelda for some days. Now he wants to hear how she’s doing … and if she’s seeing Martin?

Tusnelda looks a little puzzled at Rasmus. Does he and Martin not talk with each other?

I am feeling fantastic cheers Tusnelda.
It goes well at work and with the store and regarding Martin …

… maybe you can ask him yourself.

Oh! says Rasmus a little surprised. This is where he hides.

Nice. Does that mean you can be called a couple?

I think so, says Martin and looks lovingly at Tusnelda.

Rasmus smiles big but at the same time he also feels it is a bit awkward. He should say congratulations, right?

Maybe I should go so the two of you can be alone? Rasmus asks.

No Rasmus, please stay! We can go out to the campfire, says Tusnelda.

Rasmus is a good friend and Tusnelda would very much like to listen to him and share advice and experiences from her time in the cooking industry.
They are a kind of colleagues now that Rasmus has become a kitchen assistant.

Tusnelda is not lonely anymore.
Down in the mine, Martin is waiting….

… and he stays with her all night.

Next day in Brindleton Bay

The next day, Martin goes home to train on his treadmill.
Fiona says welcome with a cuddly hum.

Hi Fiona have you missed me? asks Martin.
I do not have time to play now. I will have to concentrate on my program.

Fiona looks longingly for Martin … She knows he will not give up his program for now.

Martin still lets himself be interrupted when Tusnelda comes by.

You’re just wonderful, Martin replies. I have to show you how manly I can be….

…. but right now I have to take care of my workout.

I might be able to help you with that, says Tusnelda cheerfully.

Are you sure I should not show you some exercises, says Tusnelda teasingly.

Do not tempt me woman, otherwise I will …

We never get to know what Martin has in mind because now Rasmus enters the room.

Tusnelda I was just hoping to find you here. I’ve seen something you might find interesting.

Now Rasmus tells that he has been out running …

… Tusnelda can perhaps imagine how Martin constantly encourages him to train?

Tusnelda listens a little distractedly to Rasmus’ description of the run on the beach and how heavy it feels to run in sand…..

….but when Rasmus describes the trip home, he suddenly tells something that makes Tusnelda listen.

Rasmus leaves the two turtle doves to cook a meal.

In the background he can hear Tusnelda and Martin kissing and whispering to each other.
He can almost feel left over in his own home.

Bon appetite! Now I hope the food will taste good to you, says Rasmus.

Rasmus looks a little disappointed at Tusnelda. She has finished her meal in a hurry and she and Martin quickly leave the dining room table. She obviously does not have time for a conversation today.

You would show me some exercises Martin says hopefully to Tusnelda.

Rasmus carries food and dishes off the table.
Martin and Tusnelda have disappeared into Martin’s room.

He can all too well imagine what those exercises are all about.

He turns up the volume on the television. Now he might as well concentrate on the Chefs Contest.

Tusnelda does not stay for the night. She has a task waiting for her at home.

In the mine, Trix lies dull on the bench.

Suddenly he is awakened by his slumber.
Was it Tusnelda coming home … and did she notice that his food bowl is empty?

Tusnelda immediately turns on her computer and opens the housing portal’s website.

Trix sits up wondering. Has she not seen him at all?

Suddenly he hears a loud shout of joy.

Trix comes running fast to see what it’s all about.
Tusnelda looks at him happily. I have found a house Trix that I can afford to pay, that means we may soon be able to move away from the mine.

I hope you have time to feed me before we move, meow’s Trix seriously.

Of course, Trix gets his food.
Tusnelda has certainly not forgotten him despite her many chores.

Tusnelda feels like painting a picture.
Life is fantastic! She is full of confidence and feels almost like this lion.

Next morning in Willow Creek

Dan is a confident business man who is always busy.

He has a good reputation and he always has a lot of sellers and buyers on the phone.

He has built his business from scratch and after several years he will say that he has been successful.

Tusnelda has never visited a real estate agent before and she looks around searching. Where should she start?

While Dan ends his phone call, she looks at the photographs of houses for sale.

Can I help you with something say Dan accommodating.

Tusnelda asks for the house she has in mind.

An hour later, they are standing in front of the house in Brindleton Bay.
It’s an estate in need of a loving hand, but it’s cheap and probably the right place for an enterprising woman like you, Dan says encouragingly.

I think you are absolutely right, says Tusnelda.

Brilliant! Dan answers enthusiastically.
Let’s go back to the office so I can make the purchase agreement ready for your signature.

Shortly after, Tusnelda has bought a house.

Martin is taking a break from his training for once and he has just turned on the television to watch a travel program.

Now he receives a text message from Tusnelda.
She asks if he can meet her at Magnolia Park in Willow Creek.

What brings you to Willow Creek, Martin asks curiously.

I just had an important meeting with a man says Tusnelda affectionately.

Later, she told Martin about the real estate agent and the house.
I hope you will help me with the move? There are so many practical things that need to be fixed, says Tusnelda.

Of course you can count on me, Martin answers.

Then that agreement is also sealed.

Trix has sought refuge at a nearby park.
There is often unrest when Martin is visiting but never before have Tusnelda and Martin made noise and rumbled as much as this night.

He feels terribly depressed and just wishes Martin would disappear out of his life again.
If only everything would fade away.

When Trix returns home he will soon discover that his wish has been made.

Martin has traveled home to Brindleton Bay but all the crops are gone too.

Gone is Tusnelda television, her photographs and all her knickknacks on the mantelpiece.

Tusnelda’s bed and furniture have disappeared from the mine underground.

Tusnelda stands in the middle of the garden and looks dreamily up at the stars.

Oh! It’s good that you came Trix, then we’m ready to go.

This is the first time Trix sees their upcoming home.

It is good to see that Tusnelda has remembered his food bowl.

Tusnelda lights the fireplace. The house is cold after being uninhabited for a long time.

It’s been a long night and Tusnelda is terribly tired.

She is happy that her bed has already been put in place.

Shortly after, both Tusnelda and Trix sleep soundly.

The sun will soon rise, but Tusnelda and Trix will still sleep long.
The first day in their new home has just begun.

Tusnelda’s house is built by Anbodil. It is no longer available in the gallery.