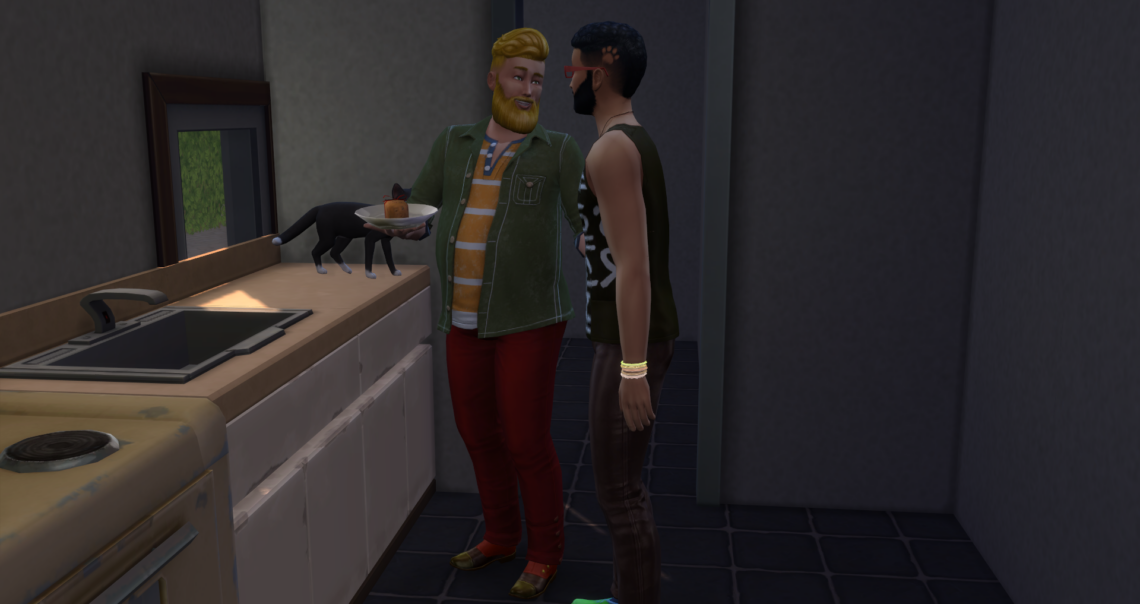 Tusnelda and Trix wake up after their first night in the new house.
It’s time to think about the interior design of the house and it’s time to get to know the new neighbors a little better.
There are many new things but soon Trix will discover that some things never change.

It’s the first morning in the new house. This is different from the dark mine, so Tusnelda is awakened by the morning light.

Trix, on the other hand, can easily sleep regardless of light or darkness.

Tusnelda looks around the empty living room. There will be plenty to do here … maybe she should order some professional craftsmen?

First of all, she wants to find herself some breakfast. It is impossible to make a sensible plan when the stomach is empty.

Both Martin and Rasmus have promised to give her some help, but perhaps the remodeling of an entire house requires more than helpful friends.

Trix has woken up and he immediately picks up Tusnelda’s mood. He tries to catch her attention by a loud meow.

Sorry Trix. I’m sure there’s no need to worry. We’ll get through it together you and I …. Where do we start?

Are you asking me for advice? Trix thinks in astonishment.

If Tusnelda had really been able to listen to Trix advice, then they would never have ended up in San Myshuno.
Trix looks around a bit confused. This is not the usual Geekcon festival.

Of course, Trix should have been able to figure out that this has something to do with Martin.

I heard about this flea market and thought it might be a good place to start says Martin cheerfully.
Look around and maybe you will find something cheap and useful for the decor of the house.

Tusnelda goes purposefully in the direction of the small lamps …

Martin seems to be missing something to eat and he buys some food at one of the stalls.

Trix only misses Tusnelda … where can she be?

He catches sight of her just as Rasmus approaches.

It was Rasmus who initially won the attention and Trix goes exploring again on his own.

Trix discovers that the three friends have found a new diversion.

It’s definitely a healthy occupation … but did you not have a house to decorate Tusnelda?

Right now, Tusnelda doesn’t seem to care about those insignificant things. Out of sight, out of mind and now the ball is in her focus.

It will be Martin who suggests that they go home to see what they can do.

Tusnelda starts by finding vegetables from the fridge.

You see Rasmus! Without food, the hero will not do. We need lunch before I can think constructively.

There do not appear to be any protests.

Both Rasmus and Trix try to catch Tusnelda’s attention, but there is a handsome obstacle.
Rasmus has brought a nice surprise.

They get dangerously close to the bedroom before Rasmus manages to break the duality.
It is customary for the neighbors to bring fruitcake, so I made the dessert, says Rasmus proudly.

Oops! Back to reality…. You have more than one guest Tusnelda.

I really hope it’s worth the effort, says Martin as he looks Rasmus straight into his eyes.

There’s something in his friend’s gaze that makes Rasmus feel insecure …. maybe he should rather leave?

Tusnelda interrupts her two friends’ silent communication.
Come on! Let us taste the cake and afterwards we can plan the remodeling of the house together.

Martin stares at Rasmus piece of the cake …. it looks interesting. Where exactly did you find the recipe?

Rasmus has just taken the first mouthful and immediately he lacks words. His gaze has become strangely blank. Ugh ?!

Tusnelda loves desserts and she enthusiastically begins to eat the cake.

It is when she has swallowed the last bite that the aftermath begins. That’s horrible!

Rasmus apologizes to Tusnelda. He will have to leave right away. Stomach problems.
Martin has already disappeared out the front door.

Tusnelda looks resignedly at the remains of the horrible dessert….
Both of her friends have disappeared. Now she will definitely have to order a professional craftsman.
She does not feel very comfortable. Her stomach rumbles … now comes the nausea. Oh no!

Rasmus does not heed the glow of the sun as he sadly walks towards his home.

What Rasmus does not see is a purple sky, therefore this picture must be included.

This whole afternoon has been a big failure and Rasmus is not sure Martin or Tusnelda will ever forgive him again.

I’m pretty sure Tusnelda does not blame Rasmus …. and as for Martin, it’s all probably soon forgotten.

Martin does what he always does when something frustrates him.
After sacrificing the cake in the toilet, he chooses to go on a run.

This evening sky is exceptionally beautiful and soon body and soul will be reborn again.

Today’s troubles are not over for Rasmus at all. He has just started dinner when the stove catches fire….. Oh no!!!

It’s good to see Rasmus taking action instead of panicking.
You can never predict how you will react in an emergency.

But Fiona is frightened out of her wits and flees far out of town.

Poor Rasmus. What a yoke. Everything seems to go wrong.

Rasmus tries to calm down in front of the television … but soon he notices Brooke’s accusing eyes.
Why did you do that Rasmus !?

Martin has fought his nausea. He is tired after the long run and now he longs to get home in the shower.

Rasmus has started with an alternative evening meal. It must be salad.

Martin has finished his shower and is relaxing with a TV series. Just one of those series that helps the brain to deal with nothing.

I know Rasmus … it’s not your day. Fortunately, a new day will be born tomorrow.

Martin and Rasmus carry the broken stove out onto the lawn, and once Rasmus has gone to bed, Martins begins to repair it.
Rasmus had no cause for concern. That’s what friends do … they forgive and help each other.

The morning has just begun when Fiona jumps up the stairs and Martin finishes the repair.

Martin eats his breakfast.
Then he’s going to bed. In five hours he will be at work.

Tusnelda has just been released from work and it is approaching midnight.
Trix looks at Martin. Who invited you to visit?

Pink stars glow in the night in Brindleton Bay.

Trix has found a bench far away from the house.
His disappointment is easy to spot. Things have not changed that much since they lived in the mine.

By morning, everyone has calmed down and Trix has found a place to sleep close to Tusnelda.

Right now, Tusnelda and Martin do not have to worry about hurting anyone’s feelings.

Martin completely controls his own whims and it is clear to see that he is in love with Tusnelda.

He thinks she is irresistible.

They are so sweet together.

Trix wakes up and sees that nothing has changed since yesterday.

Even Trix must then be able to see that it is sweet that Martin automatically makes breakfast for Tusnelda?

When the food is done, Martin says goodbye and leaves. He will probably train for the day’s work.

Tusnelda eats and puts on her clothes. Finally, she has time to entertain Trix.

Hello! We are from Smith and Co. You have ordered some craftsmen.

Tusnelda invites the guys inside and explains which walls are to be knocked down and where new room is to be built.
Some floors need to be planed and walls need to be painted.
Tusnelda has to take care of her own work but she asks them to call her if they have any doubts about the process.

Trix watches it all with increasing concern.

Shortly after, Tusnelda goes to work and she leaves Trix in charge of it all. It’s a big responsibility for a little cat.

Trix runs into the living room and stares stiffly at the craftsmen.
I see you are still here! he growls. Make sure I keep an eye on you!

Yep Tusnelda! As always, you can be quite confident. Trix will never let you down.

What a weird idea to put the mirror on the coffee table.

Tusnelda has got another weird idea … She’s started building a rocket.

Now Tusnelda enters through the shed.

She pauses for a moment and looks at her frogs.

Tusnelda sits down with her lunch.

Trix looks at her from the top of the kitchen cabinets.
The wall has been removed towards the living room and it gives him a good overview.

But nothing lasts forever and suddenly there is a knock on the door.

It is the neighbors who come to visit. They present themselves as Supriya and Justin Dulgato.
Tusnelda kindly welcomes them inside.

Tusnelda shows them around the house and afterwards she asks them to stay a little longer. It’s always nice to meet new people.

Justin! You may like to find the fruitcake now the woman says.

But I do not have the fruitcake Supriya, the man answers. I thought you had the cake?

Supriya gets annoyed and she wants to send Justine home to pick up the cake but Tusnelda quickly interrupts her.
No, please! It’s not necessary at all …. I’m a chef and I can quickly stir a cake together.

In a brief moment, Tusnelda finds the ingredients.

Quickly the cake is in the oven and what almost ended in a quarrel ends in peace of reconciliation.

The cake is served!
Tusnelda happily calls her guests to the table, while she thinks she is happy to avoid another fruitcake disaster.

The neighbors praise her cake. Even they do not seem to regret their forgetfulness.

Later, when the neighbors have left, Tusnelda starts her new washing machine.

Now she just wants to relax in her newly decorated home in front of the tv.

Now there is a knock on the door.

Trix comes curiously running …
Oh! Him again! He never gets tired of coming by.

Tusnelda wants to show Martin around the house … and they might start in the bedroom.

As I said. Some things never change …. and even during the day, the pink star twinkles in Brindleton Bay.