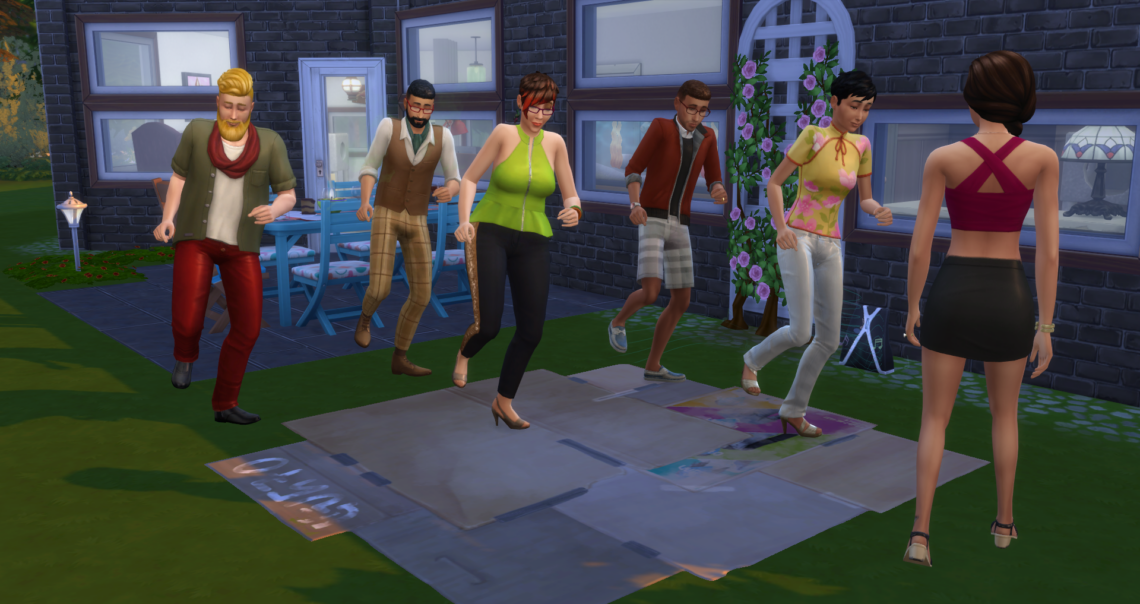 If you are allergic to too much love and pink sparks then skip this chapter.
Tusnelda and Martin are still floating around in a pink bubble of love. Someday it may have an end but Tusnelda is not ready to meet that day yet.

Everything indicated that it would be a wonderful day. Tusnelda was in the middle of a long confidential conversation with Trix when there was a knock on the garden door.

Him again! Every time Tusnelda gives me some attention he comes running, Trix thinks angrily.

Martin invites Tusnelda on a date and it will be without Trix.

Is there a more romantic place to date than at the Sakura Festival?

Tusnelda and Martin start by pouring a glass of Sakura tea and then the atmosphere can not get more romantic.

Pink tea and a very handsome and attentive man. Life is perfect!

Martin wants to buy some food and encourages Tusnelda to follow him to the food stalls.

I’ll be there in a second, Tusnelda answers … there’s just someone I need to talk to.

Tusnelda just wants to tell the romance guru that he was absolutely right in his prediction.
Maybe he can tell her a little more details about her future …

Tusnelda had not expected this answer.
The romance guru tells Tusnelda that her romantic destiny is full of challenges and trials.

Meanwhile, Martin is struggling with some very present challenges.
Chopsticks are definitely not created for a manly hand that mostly deals with more gross motor skills.

Tusnelda is annoyed that the guru just today had to puncture her pink bubble of happiness.
She goes to the beds to gather some rare flowers while mumbling over the stupid prediction.
She does not get in a better mood when she is suddenly reminded of Flora.

It was here at the Sakura Festival in the company of Flora that she met Martin for the first time.
She has not seen her friend for many weeks and now she misses their conversations on herbs and science topics.

Regarding Martin … how is your date Tusnelda?

Martin is still sitting alone struggling with his ramen, but luckily it seems that Tusnelda is giving him company now.

Tusnelda seems to be able to handle the chopsticks without any problems.

Martin is as sweet and attentive as one could wish for and Tusnelda wonders what challenges the guru alluded to.

Wait for me, Martin says, I just need to fix a natural need.

As time goes on, Tusnelda begins to wonder what Martin takes so long to fix in the toilet. Maybe his food contained some bad items?

There was nothing wrong with the food but it seems Martin has been overwhelmed by another urgent need.

The man is just exhausted!

This was the end of a very awkward date.

Regardless of a less successful festival, Tusnelda invites Martin to spend the night.
Of course he agrees.

Tusnelda brushes her teeth and gets ready for an evening with the love of her life.

Oh Tusnelda! Regardless of predictions, this can not even be called a bump in the road.
Martin simply just needs to sleep.

Tusnelda finds a book. It did not turn out to be the day she had hoped for. She maybe misses some pink sparks.

Trix has no reason to complain. What a wonderful peace. For once, that man stays calm.

Shortly after midnight, Martin gets up.

After breakfast, he fortunately does not look bothered anymore.

Here comes Tusnelda in all her lush feminine grace.

Just then, the last remnant of Martin’s fatigue disappeared.

Several hours later, when the sun has risen and everyone is properly dressed, Martin tries to get in touch with Trix.
Trix is not much for making concessions and hisses that he should rather stay away.

Martin and Tusnelda talk casually together and if there have ever been any bumps between them then everything is forgotten now.

See you tonight says Martin and gives Tusnelda a kiss to say goodbye.

Trix observes it all with satisfaction a little at a distance.

It’s a lovely day and Tusnelda goes out on the lawn to paint at her easel.

Hello Rasmus! It’s been a long time since I’ve seen you. Have you been busy at work? asks Tusnelda.

Rasmus still has a bad conscience after his terrible fruitcake and then there is also the consideration for Tusnelda and Martin. Maybe they would rather be alone?

Tusnelda convinces Rasmus that he is a very dear friend and that he is always welcome.
Come in and have lunch with me says Tusnelda. You can help me plan a party.

Later, the two friends sit peacefully and discuss Tusnelda’s plans while they eat.
Tusnelda wants to invite friends and neighbors to a housewarming party.

Trix has already made his own preparations for the party with a very special cat-friendly perfume. Ugh!

The day comes and Tusnelda stirs a cake together.

This is her very own special recipe. A sponge cake with layers of mocha chocolate buttercream.

All preparations are almost complete and now she just wants to enjoy the moment with Martin before the party begins.

Tusnelda take one last look out over the tables.
Now the guests can just come.

Rasmus arrives as the first.

Soon everyone is together.
For today’s occasion, Tusnelda has hired a bartender and chef.

Cheers and welcome!
Does anyone feel like a tour of the house?

Everyone looks so happy….. Tusnelda has no idea who invited Jade, but now that she’s here she must be very welcome.

Supriya has even brought the family dog … it does not seem to cause any trouble.

After the tour, Tusnelda serves her cake.

Tusnelda is so happy that Flora showed up to the party and she gives her friend a compliment. You look amazing today Flora! … and how glad I am to see you.

Trix, who has fortunately got rid of his perfume, looks at the company with wondering eyes.

What a strange assembly!

He must constantly wonder about human behavior. No self-respecting cat would participate in that kind of mass psychosis.

Finally, the group dance is over and the guests start behaving a little more normally.

Tusnelda and Martin without exception.

It’s getting dark and the official part of the party is over.

Some continue to build new friendships.

Hi Flora! Do you know what became of Tusnelda?

Well! Tusnelda prefers to build on the friendship she already have.

The night is young and there is still plenty of time to dance.

Rasmus seems to be in a really good place tonight.

The last turn off the light when they go.

It’s long past midnight before the silence finally arrive.

As always, Martin is the first to wake up.

He immediately starts cleaning up after the party.
What an amazing man.

There is not much life in Tusnelda but I understand her …. the sun has not risen yet.

Martin finishes the cleanup and starts energetically on a series of push-ups.
That man is very energetic.

Suddenly Tusnelda is standing right in front of him and she is looking at him with very serious eyes.
She wants to ask Martin something … Will you go with me on a vacation?

Tusnelda I will accompany you to the moon answer Martin tenderly.

Next stop will be Granite Falls.