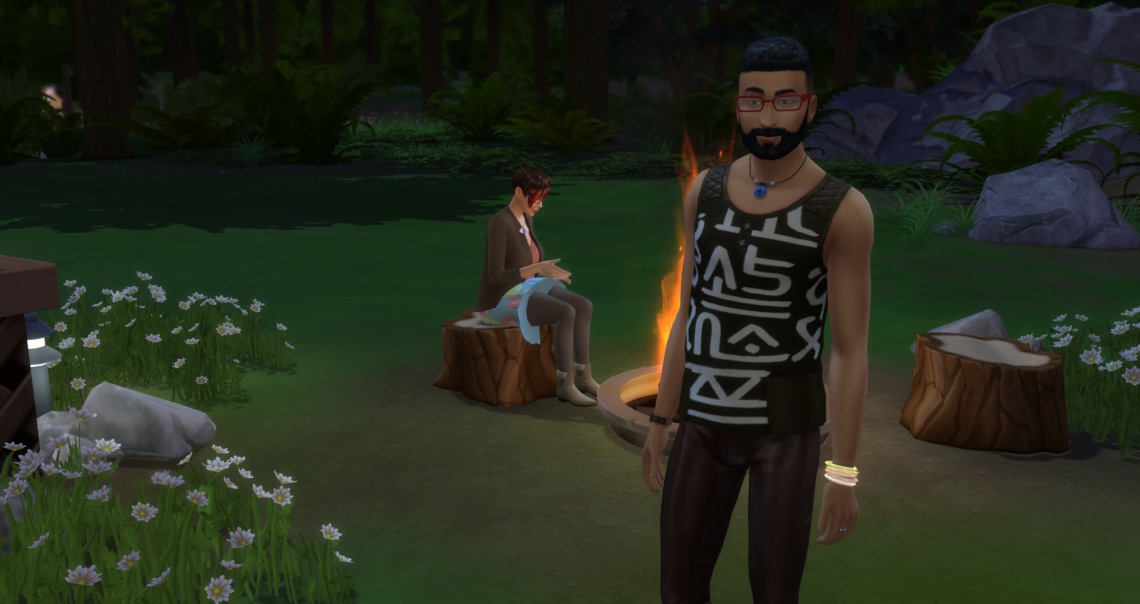 Tusnelda, Trix and Martin have embarked on their holiday together.
Here comes the relationship to a test. Will Tusnelda discover what the romance guru meant by his predictions?
What about Trix. How will he cope three days with a man he would rather see disappear?
Maybe this chapter will give you some answers.

It’s the first day of their vacation and Tusnelda, Trix and Martin have just arrived at their accommodation.

Tusnelda wants to bring Martin into the cabin so they can take a closer look.

What a crazy idea Trix is thinking. Outside is a large green forest that hides all sorts of exciting scents and experiences.

Trix uses his nose diligently. They have not yet lived in exactly this cabin so Trix is busy researching everything carefully.

Inside, Tusnelda and Martin are busy with making pink sparks.

Typical! Tusnelda has once again been distracted and she has forgotten all about Trix’s food bowl.
He better see what she’s doing.

Hey! If you two have finished rummaging around then maybe you could give me some food Tusnelda … and I might be able to take a nap on the bed, Trix says with a loud meow.

Martin sits down next to Trix on the bed.
I hope we can get to know each other a little better through this holiday and we can become good friends Martin says kindly.

We’ll see if you can earn my friendship, Trix thinks as he measures Martin at a proper distance.

He has never before seen such a sparkling enticing feather duster … Wow!! Give me that Martin! I long to put my teeth and claws into these alluring sparkling feathers.

Martin smiles big as he bends down to cuddle Trix.
Maybe there’s a way into Trix’s friendship anyway.

Trix hurries away….
Sorry Martin! I do not have time to entertain you anymore .. I have to see if Tusnelda has remembered my food.

Luckily, Tusnelda thought of Trix’s food just as he entered the room.

Trix loves his crunchy crispy food more than any other food.

Trix barely manages to digest the food before his meal is interrupted by Martin.
Now he might as well disappear to a quieter place.

If it goes as usual, they will soon start fooling around again, Trix thinks angrily.

However, it must turn out that Trix is wrong in his prediction for both Tusnelda and Martin are going outside.
Tusnelda starts by making some delicious grilled fruit.

Tusnelda continues her talk about the fruits’ content of healthy vitamins and their slimming effect.

Martin can hardly express his excitement.

After lunch, Tusnelda and Martin compete in horseshoe throwing for a while.

In the afternoon, Tusnelda decides to run.

Along the way, she stops to harvest some herbs ….

… and catch some insects.

Trix embarks on his own excursion.

There are many interesting things to explore but suddenly he sees a sight that amazes him.

Martin! What are you doing? Trix is asking with a nosey meow.

I don’t know how you feel Trix, but I don’t think the fruit saturates very long, Martin replies thoughtfully.

Fortunately, Tusnelda has never tried to feed me grilled fruit, Trix purrs contentedly while he casually begins to groome his fur.

Later, Trix and Martin find their way home to the cabin together.

The joy of reunion is as loving as ever.

Everyone is tired after an eventful day and soon everyone is asleep.

Trix sleeps heavily and dreams of the many impressions of the day. This night, nothing disturbs his sleep.

After a good night’s sleep, the small group visits the deep forest.
Trix lets Tusnelda take care of her own affairs while he forms an overview of the area.

In the next moment, a squirrel runs over the forest floor, but it quickly disappears before Trix has time to set after it. Damn!

Trix tries to catch the scent of the squirrels hiding place, but must realize that once again the squirrel won.

Tusnelda finds several useful herbs that she can use for ointments and medicines.

Suddenly she stops Martin on his route…. Follow me and I’ll show you something interesting ….

Martin stops in astonishment when he sees an opening in the dense thicket.

Tusnelda finds some insects she can catch before moving on.

I think we should rather obey, says Martin with a twinkle in his eye…

I’m a cat and I really only follow my own whims, Trix replies with a short offended meow. But please, feel free to obey … I do not prevent you.

A little later, they are all gathered on the other side of the secret entrance.

Trix catches a fast movement and his eyes get big and attentive ….

There it is again … this magnificent glistening alluring feather duster.
Trix dances eagerly around in a cloud of rainbow-colored sparks as he tries to catch it in flight.

Soon it’s up and soon it’s down … if only Martin could stay still for a moment. … Damn! That man is moving way too much.

Martin looks at Trix with a smile as he leaves, ignited by energy.

Trix stops after a long run. Now he sees something that will interest Tusnelda.

As usual, Tusnelda has been distracted by a handsome interruption.

Oh Martin! You’re so romantic … I think I faint, she sighs as her legs turn to jelly bars.

Then I have to make sure you do not fall anywhere, answer Martin tenderly while he embraces her body with a firm grip.

Right now, Tusnelda is giving a damn about the romance guru’s predictions. He knows absolutely nothing about true love.

Tusnelda and Matins road part for a moment.
She wants to collect herbs and insects and in the meantime Martin goes for a walk in the enchanted landscape.

On her way, Tusnelda catches sight of Flora.

They did not manage to talk so much together at Tusneldas Housewarming and now there is so much they both want to pick up on.

They talk for a long time about common interests and Tusnelda receives another of Flora’s recipes for ointments and herbal medicines.

Martin has long since finished his hike and now he is lying in front of Flora’s cabin waiting for Tusnelda.
He must wonder at her ability to forget time and place.

Martin decides to make some vegetarian burgers and his recipe does not contain any kind of fruit.

Then he continues to wait …
Here Trix comes back from his excursions.

Trix tries to entice Martin to find the feather duster. His claws are already longing to catch the enticing prey.

Trix and Martin gradually seem to have become friends.

Tusnelda has finally arrived and she starts grilling some fish she has caught.

Trix jumps up on their dinner table and gives Martin an encouraging meow, but he must realize that his chance is probably not present.

This time, Martin does not bother to play so he might as well take a nap.

Flora has returned home to her herbs.
In the background you can see the tent they have pitched for the night.

While the very last sun disappears behind the high mountains, Tusnelda and Martin enjoy each other’s presence at the campfire.

When twilight comes they make themselves ready for a night in tent.

Something catches Flora’s attention and makes her give up her chores.

Pink sparks shine between the trees.

It looks fantastic but no one worries about asking Flora what she thinks. Young love knows no bounds.

The moon is high in the sky and the night has taken over.

In the tent there is finally peace and quiet.

As the first thing the next morning, Tusnelda makes sure Trix gets some food.

Now the group returns to the deep forest and Tusnelda continues her hunt for insects.

Shortly after, she and Martin fish together.

Trix looks at it all from a distance.

Shortly after, he approaches …

Hey Martin! Are you sure we should not entertain ourselves together instead?

It will be afternoon before the small group returns to the camping cabin.
Trix runs fast in advance to check the condition of his food bowl.

Tusnelda gives Trix a hug. I apologize that I have hardly cuddled with you through this holiday, she says gently.

Trix looks at Tusnelda with serious eyes and then he purrs….
Well, I’m fine Tusnelda …. but you know what I think? …Maybe I can eventually get used to your sparkling man.

Tusnelda goes out to the grill to make dinner.

Perhaps she finally realizes that grilled fruit is not Martin’s favorite dish when she sees him eating the fish with great pleasure.

Fish is probably also a healthy food, she says to herself.

You bet it is, says Martin with a satisfied mine. Especially when cooked by a wonderful chef like you.

Tusnelda goes out into the woods to harvest the last insects and herbs.

Trix goes one last round to say goodbye to it all…

… but he’s definitely not going to miss this furry guy.

It gets dark before Tusnelda decides she has collected enough.

When she gets back to the cabin, she only finds Trix.
Where is Martin she asks?

Martin has slept for a long time.

Tusnelda sits by the fire to enjoy the silence of the forest one last time before traveling home.

Now Martin shows up.
Maybe we could use a little more heat, he says, throwing a log on the fire.

Tusnelda roasts a marshmallow while her thoughts flow freely between large and small subjects. She loves to visit the forest ….

… but never before has she enjoyed it so much as this time with Martin by her side.

With these last sparks, Tusnelda and Trix reached the end of a holiday with the wonderful sparkling man.