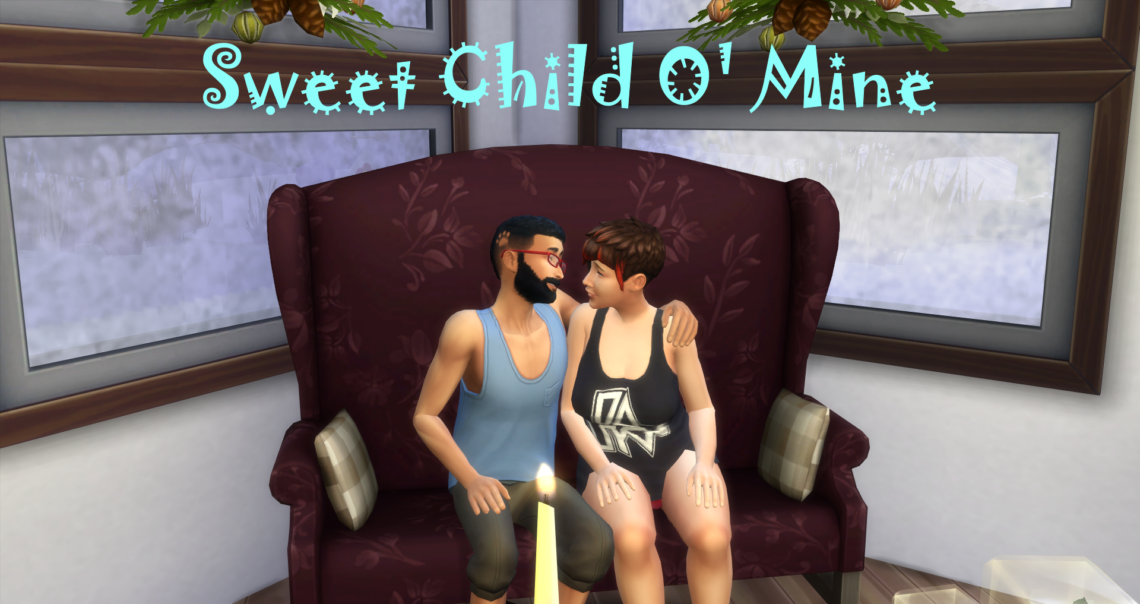 Today it’s time to follow Martin’s dreams.
I have to regret that this whole Christmas adventure has been delayed due to practical circumstances over which I have no control.
Now back to the story. We all know that Martin has a lovely wife and thus almost everything he wants… however, there is a big unfulfilled wish left. NB: I would again warn against large amounts of happiness.

Outside, the snow is falling heavily.

Suddenly life comes to the bedroom and it is not Martin and Tusnelda who is the cause.

A high howl fills the space

Martin jumps out of bed with a startled jump.

His little daughter wipes her eyes and lights up when she sees he is awake.

Martin laughs to himself…. He has been so far away in his dreams that he has almost forgotten he has a child.

Martin loves to hug her little chubby body. She is so trusting and loving.

Silja babbles merrily and Martin sits down patiently and listens to her happy babble.

She is a skilled little girl and a little later she finds herself her potty in the bathroom.

Meanwhile, Tusnelda has woken up and she gives him a morning-warm hug.
That’s the other thing he loves.

“You are the love of my life Tusnelda … You and then our little sweet girl.

Silja runs towards the living room, followed by the grown-up kittens.

Silja loves the cats, like the rest of the family.

Trix greets her kindly with an upright tail.

Martin follows a football team on television. It’s one of his job responsibilities … and certainly not a commitment he’s opposed to.

“Hi Martin, breakfast is ready. Do you have time?”

“I’ll be there in a moment,” he replies absently.

Silja looks at her parents.

Then she uses her most effective tool to call their attention …. She cries loudly.

Tusnelda squats down and gives her a hug.

“I knew you were going to be a great mom.” says Martin, without his eyes dropping the television.

It looks like Martin has finally finished observing the opposing team’s player technique.

Silja quickly eats her cornflakes. “Up!” She says.

Martin does not even manage to react until Tusnelda picks her up.

“You have to remember to eat,” she tells Martin.

Martin eats while Tusnelda dresses Silja.
She looks like a little angel …. or maybe a fairy?

Martin does the dishes.

Then he has to go to work.

When he returns home he is greeted by two small chubby arms.

He immediately finds a picture book that they are reading together.

It’s definitely one thing they enjoy together.

Tusnelda has found a box of Christmas decorations.

This is the first time they are celebrating Christmas and it should be celebrated according to all regulations.

Maybe these light chains are a bit exaggerated?

The whole family has put on warm clothes and gathered outside.

Tusnelda continues to paint on an abstract painting.

Martin realizes that it is too cold to play chess and now he is caught by Silja’s gaze.

Martin swings her around in the air.

Oh, how he loves this little happy face.

Martin finds a picture book to read a goodnight story….

… but Silja sleeps before he can turn the first page.

It’s so wonderful to be a father, … just like he’s dreamed of.

Martin is given time to play with the cats, but apparently Fie is very frightened by his sparkling toys.

Tusnelda scratches Trix under his chin.

She goes out to build on the rocket.

Suddenly she hears a small voice babbling…. It is Silja who has already woken up.

Now comes Martin. You must sleep now, sweet little child of mine.

Sooner or later, they all finally sleep.

It’s early in the morning and Martin is training on the treadmill as often before.

In the kitchen, Silja is having her breakfast.
She has slept well and she is in a good mood.

Tusnelda keeps a watchful eye on her.

“Now you seem to have finished eating.”

Martin follows Silja with his eyes.

Soon, Silja is busy with her bricks so Martin can watch his soccer matches as he usually does.

The biggest troublemakers are the cats who meow constantly.

Now he is also interrupted by someone knocking on the door.

“Unfortunately I’m going to work in a moment Rasmus, but you’re welcome inside.” says Martin.

Silja claps her hands when she sees Rasmus.

Hey, Silja! How are you today? “Rasmus asks kindly.

Shortly after, she crawls up and sits down next to Rasmus.

Now there is a loud cry.

Martin and Tusnelda both jump out of bed.

“Just sleep on my darling, I’m taking care of her.” says Martin.

“You don’t have to wake us up crying every morning” Martin says a little grumpily.

His face immediately becomes gentle and loving when he sees Silja’s worried face.

Martin puts her in the high chair. Her sandwich is already waiting.

Silja still looks a little worried while Martin picks up his own breakfast.

She quickly gets in a better mood.

“Wow! This is delicious!”

Soon they are chatting casually together. Silja babbling and Martin kindly responds back.

Now Tusnelda is getting out of bed.

Martin enjoys this moment. He has everything he dreams of.

… and a dear little daughter.

A little later, it’s time to go to work again.

When he comes home in the afternoon, he hears Silja’s happy voice through the window.

“Have you been a sweet girl and not disturbed your mother?” asks Martin.

Tusnelda sits and listens to their common joy. She has a lovely family … a wonderful husband.

She gives Martin a kiss on the cheek.

“Do you call that a kiss? … this is a kiss!” says Martin, giving her a deep kiss.

“Tonight when she sleeps?” he asks with a whisper.

“I’m putting her to sleep now,” he continues a little louder.

“Who threw the laundry on the floor?” Martin asks.

Silja has nothing to say. She goes to bed while Martin gathers the dirty clothes.

Even in dreams he thinks of laundry.

The washing machine gets started quickly.

Now is the time for adulthood.

Tusnelda is so happy. It is something with a great achievement she has accomplished.

Silja is sitting on the floor with her plate.

Tusnelda grabs her and swings her around in the air.

“There’s someone who needs a clean diaper!” she laughs.

“You heard your mother. You have to take a bath,” Martin says encouragingly.

Another one of the pleasures of parenting life.

Silja runs in clean and hugs her mother.

Martin is taking a jog.

The sky is clear blue and the landscape looks wonderful, snow-covered as it is now.

He does not see an elderly lady in white clothes.

It’s Magic who’s keeping an eye on him.

Tusnelda is still sitting in her sleeping shirt when he gets home.

She is the love of his life.

Silja plays with her toys and they sit down together on the couch.

“You’re the best thing that ever happened to me, Tusnelda.”

“You and our sweet child.

With that, it’s time to leave Martin’s dream.

“Today I will take a closer look at Martin’s dreams”

“She is truly a dear little toddler”

“Yes, I understand the message … I will see what I can do”

“Hey come on! You have to dream about more than that?”

“What !? I can not fulfill what you already have!”

“He must be able to show me more than that”

“What if I change the environment?”

As said so done.

Lilja sleeps safely in her travel bed…..she is, of course, still a part of the dream.

The same is true of love.

As usual, Lilja has an unfulfilled wish.

It’s one of the moments they both enjoy the most.

They have been playing in the snow most of the day.

Tusnelda and Silja on the sled.

Martin has made his first ski experiences … he needs a bigger challenge than the beginner slope.

Martin gives himself time for a little break.

Only Sims can carry a guitar in their back pocket.

Now he is striving for higher goals.

It’s time to start the journey home and it is most effective with skiing.

Wow! You’ve got it Martin! Flying like an eagle.

The rest of the descent slides smoothly.

She is always there, even in his dreams.

“Climbing? I knew you could not stand a challenge, young man!”

“Martin’s dream is complete and I love it!”

“He’s a delicious piece of manhood… Tusnelda has been lucky.”

“Oh yes, so many people dream of parenting happiness.”

“The dream is fleeting. Time goes fast and the little ones quickly get bigger.”

“It will be interesting to see Tusnelda’s dream tomorrow.”