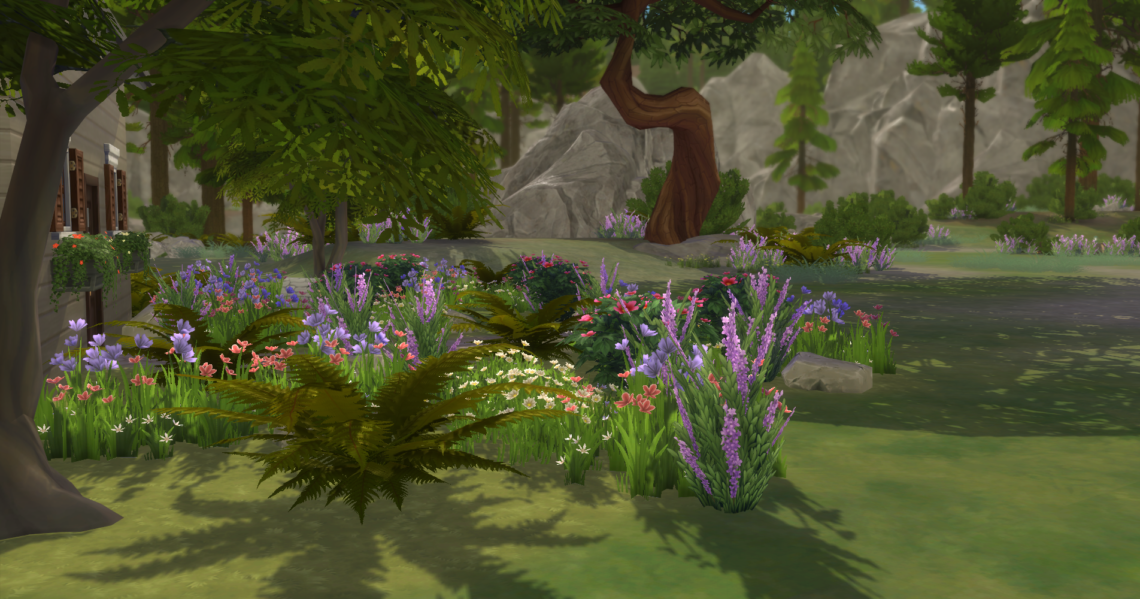 Wow Trix! This place is absolutely amazing says Tusnelda with obvious enthusiasm.
Trix looks around. There are lots of new things in the area that he want to explore…

Trix is not the only one who has cast his eye on the butterflies.
Tusnelda are approaching with purposeful steps….

Trix chooses to pursue some other insects.

He soon moves further away.

Tusnelda roast some beetles over the fire. It is part of her goal to eat from what she harvests in nature.

She remembers to put out the fire before she leaves.

A friendly voice asks her if she enjoys her meal?

Tusnelda finds it difficult to hide her discomfort. Whether it is due to the meal or the sudden unexpected contact is difficult to determine.

Everything is examined with great thoroughness and it can almost look as if Trix has taken over Tusnelda’s passion for herbs.

Tusnelda has also discovered new growths. She has found some unfamiliar mushrooms. They are picked and stored for later examination.

Tusnelda’s path has led her on to a garden where several unknown herbs grow. She discovers that some of the plants are thirsty and her innate love for the plants spurred her to water them.

Immediately the woman shows up again. She praises Tusnelda for her care for the plants and she presents herself as the guardian of nature. Her name is Flora.

At once Tusnelda forgets her usual discomfort towards strangers. She has met a woman who, like herself, loves nature and who speaks the language of science.

For the first time, Tusnelda finds it easy to talk to another human being. They talk about herbs and vegetable growing
Flora kindly shares her knowledge and she teaches Tusnelda a new recipe for herbal medicine.

As Tusnelda runs on, she feels a whole new uplifted mood … she feels like she can almost fly.
Tusnelda has found a soul mate.

Tusnelda continues her hunt for herbs.

Flora has kindly offered her to harvest her crops.

Tusnelda goes on curiously as she watches the plants in Flora’s garden.

She finds the most beautiful little dining area.

Everywhere there are flowers in beautiful colors and Tusnelda thinks that Flora’s name fits her being perfectly.

Now Tusnelda is being called upon by the sound of a waterfall.

Tusnelda finds her fishing rod and for a long time she stands by the water while she breathes in the beauty of nature and the fresh air.

The sound of the water splashing and a woodpecker chopping makes her thoughts soar high above all restraints.

Some distance away, Trix has followed in Tusnelda’s footsteps.
His nose has really come into use today and it is great to see his has found his curiosity and zest for life again.

Time flies and all too soon the sun is low in the sky.

She is very hungry and she is frying some fruits on the grill.

Trix is summoned by the smell of the food but he immediately becomes very annoyed.
“It’s not fair Tusnelda! Fruit is not proper food for a cat” he moans unhappily.

“Sorry Trix! I did not bring your food bowl with me but here you have a treat to eliminate the worst hunger”
Trix must be content with that for now.

Flora, on the other hand, really likes Tusnelda’s meal.

Tusnelda and Flora sit for a very long time at the meal and share their common thoughts.

Trix has gone to sleep. Even though he is still hungry, he is satisfied with the many exciting experiences of the day.

The afternoon has become evening.

When Trix wakes up from his sleep he sees that both Tusnelda and Flora have left the table.

Trix looks inside the house and finds Flora in her kitchen where she is cooking herbal cream.

As he moves further into the next room, he finds Tusnelda sleeping on Flora’s bed.

Trix are terribly hungry and utters a loud wailing meoooow!!

Tusnelda sits up dazed. She is not satisfied with being awakened in the middle of a wonderful dream in which she floated high among the stars of heaven.

Trix looks worriedly at Tusnelda, but luckily she realizes that they must return to the cabin.

She sets in a quick run to catch the unknown insect

Now Trix is getting very annoyed. What’s going on with Tusnelda today !? She seems so distant and self-absorbed.

Finally, they are back in the woods.

Trix immediately starts eating as soon as his food hits the bowl.

When he has eaten, he finds Tusnelda in the process of trying out a new herbal recipe.

Ugh! Now he has discovered the annoying bear.

As the bears change direction and get closer, he runs as fast as he can … he must immediately warn Tusnelda.

Tusnelda sits quietly in her own thoughts by the fire. She looks out over the creek. The holidays are over for now and tomorrow they travel home to the mine.

Looks like Trix has forgotten all about the warning and the bear.

It has been a very special day and something big has changed in Tusnelda’s consciousness.
Tusnelda gets up and throws a horseshoe…..

Pling! The horseshoe hits the stick on the first try!

Tusnelda does not grasp her own luck and emits a loud roar of joy as she jumps high into the air.

It’s time to say goodnight to the forest.

But let this stand as the last picture. Maybe Tusnelda can really fly?

….. Everything is possible for those who believe it.