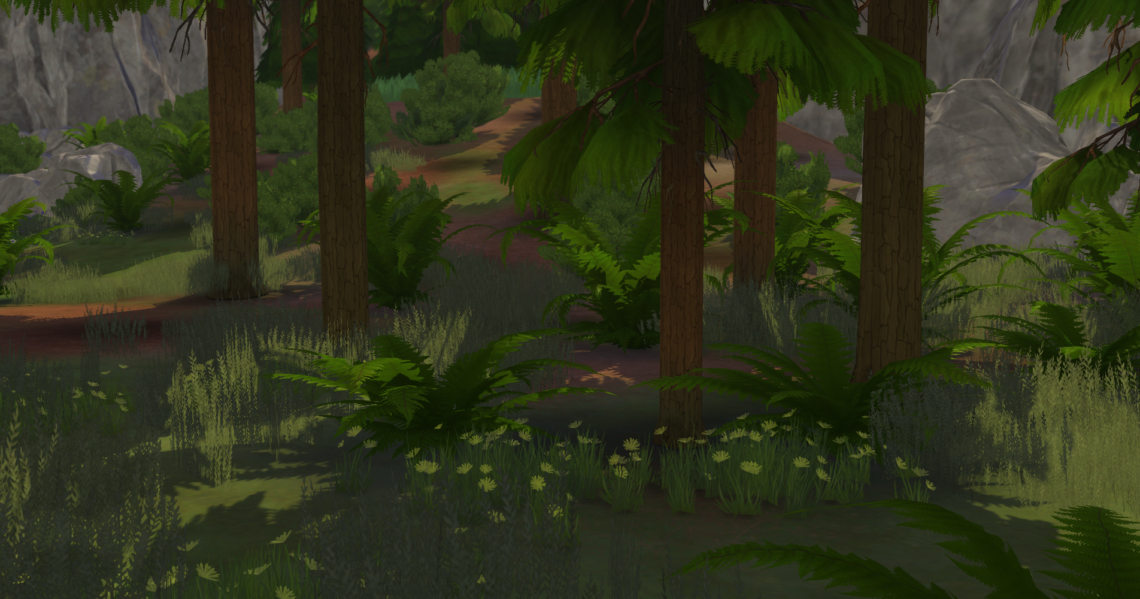 Tusnelda stands thoughtfully as she slowly stirs the pot. She feels safe and secure in the mine but over time the air feels heavy and suffocating.

Trix approaches with slow shameful steps. What has he done since he has to wear the awkward screen around his head?

Tusnelda catches sight of Trix’s praying eyes as she sits down with her breakfast …. “Poor Trix! It’s probably time I removed that horrible thing”

Finally, Trix can reach the food in his bowl and he only half-heartedly strikes out for the feathers that Tusnelda holds in front of his nose.
“I apologize Tusnelda but I’m terribly hungry and now I have to eat”

Tusnelda gives up her venture and goes out to take a shower in her outdoor bath.

She goes out with the garbage….

…. and she finds another mysterious letter in her mailbox.

Tusnelda goes out into the garden to look at her crops.
It may well seem that loneliness is removing her mind, for she begins to hold a longer conversation with the plants.

When Trix comes out to participate in the conversion, she’s on her way to work.
Have a nice day Trix.

A nice day!? Trix does not feel well at all and he might as well take a nap while waiting for Tusnelda

In the afternoon the sky becomes heavy and gloomy.

Trix is howling in front of the door. Cats can get depressed and that has definitely happened for Trix.
Where’s the little excited guy from the beach?

Tusnelda returns home from work and it seems that it is not only Trix who suffers.
Looks like they need another vacation.

The forest is precisely as fresh and green as Tusnelda remembers it.

She stands by the creek and looks beyond the horizon. She breathes the fresh air and the beautiful nature fills her with peace and joy. Now she wants to catch some fish.

Of course, Trix is also on holiday with Tusnelda, but he still seems depressed and chooses to lie inside the cabin.

Tusnelda does not have time to be in a bad mood and she pulls one beautiful fish out of the water after another.

When Tusnelda gets hungry, she cooks one of the fish over the grill.

She has learned a great deal about spices while observing the chefs at work.
It’ll be delicious!

She gently tastes an unknown plant to try to determine its species.

Along the way, she finds several minerals and crystals.

When it becomes afternoon, she sits by a campfire and studies in the book on herbal medicine.

It looks like Trix has finally moved outside and now he casts his gaze to Tusnelda.
She is not easy to get in touch with once she has found her books.

Trix scratches behind his ear … he can always give it a try.

Tusnelda does not appear to see him. She angrily waved some mosquitoes away from her nose.

When Tusnelda finally puts the book away, Trix has fallen asleep again….

Therefore, he also does not notice that she is running back to the cabin.
Hopefully he has some lovely dreams.

Tusnelda looks in the mirror as she brushes her teeth. It’s nice to return to the forest, but there are still untried adventures out there and tomorrow she will take Trix on an excursion to explore unknown areas in the forest.

Trix stretches sleepily as Tusnelda wakes him the next morning. She’s eager to get going.

Tusnelda study the map thoroughly before getting ready to leave.

Later they arrive at unknown areas in the forest.

Here the trees stand close together and reach far into the sky.

Tusnelda eagerly starts her hunt for new herbs and insects.

Trix has found his way back to his old form and he sneaks curiously through the tall grass.
He has spotted a cave in the dense thicket to be explored.

He hides for a long time in the grass, considering any dangers before taking the plunge and disappearing into the darkness.

When he comes out on the other side he sees a completely different landscape.

Now Tusnelda can hear Trix calling in the distance

The sound definitely comes from the bush there …

Shortly after, Tusnelda disappears into the darkness.