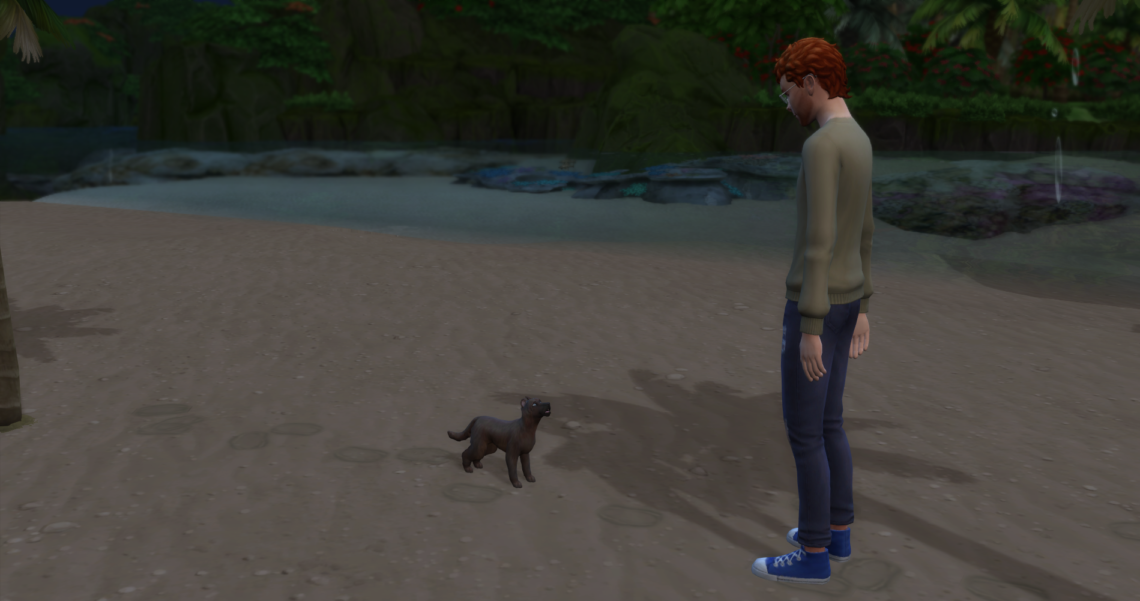 The island is hit by a heavy rain and this causes the dog to search back to the cabin.
For the first time we get an insight into Naja’s memories from childhood.

After sunshine comes rain and in Sulani the monsoon is fierce when it comes.

Now the dog has returned to find shelter. Naja stares thoughtfully at the rain.

She may just have time to start on her school assignment before she has to leave and meanwhile her thoughts return to childhood.

It was old and skinny, and it was just suddenly in front of the door one dark night.

Naja went out to talk to it and it had such mournful kind dark eyes.

It followed Naja as she left…

…. and Naja gave it some food before she went in again.

Early in the morning, Finn went out with the garbage.

The dog was still there.

It was kind and it gratefully accepted the pat and caress.

It had looked so longingly for Finn when he went in again.

Of course, it ended up being invited inside… Grandmother had said that one should be kind to the animals and receive guests kindly.

After that night, Finn and the dog Oliver became inseparable friends.

Even though it’s raining heavily …. Now it’s time for Naja to go to school.

Finn is incredibly surprised when he comes home…

… but he immediately receives the dog kindly.

It goes exactly as Naja has predicted….

Bella has now been adopted into the little family ….

…. and it noticeably helps their mood.

Finn and Naja have again found a common joy.

It probably also has an influence that Duane often comes to visit.

He and Naja can spend a long time talking about the universe and the meaning of life.

It sounds deep, but in addition, they are just two teenagers in the process of exploring the possibilities and joys of their friendship.