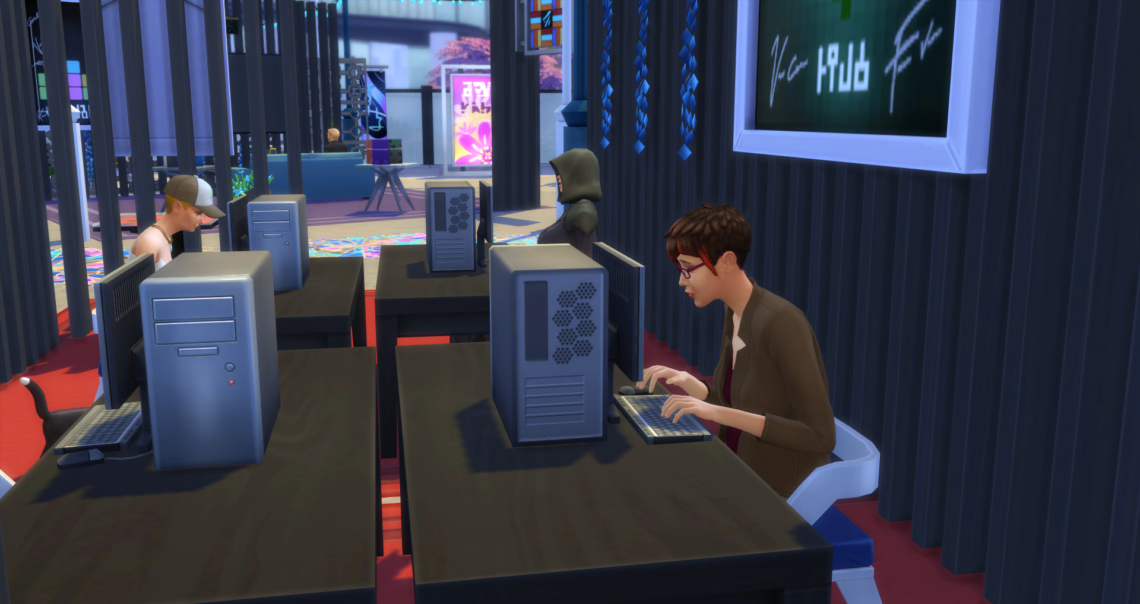 Today, Tusnelda and Trix go on an excursion that does not turn out quite as Trix had hoped and Tusnelda gets a new acquaintance.

It’s a lovely morning and Tusnelda hums as she tends her crops.

When everything is harvested, she turns to Trix. “Hi Trix! Maybe you would like to join an excursion today?”
Trix always wants a little adventure and he meows in the affirmative.

Now you get time to go exploring on your own, says Tusnelda cheerfully.

Trix looks annoyed at Tusnelda..
GeekCon! It’s not exactly the kind of excursion he had been looking forward to …

… but he knows her and once she gets a chance to participate in the hackathon then her brain is turned off. Only filled with codes.

Yep! Now this goat is shaved! exclaims Tusnelda complacently.
(Which means that the task is well done)

Just when Tusnelda has found the market stalls, it is announced over the speakers that she has won the first prize. This is the second time she has won a computer.

She wants to celebrate this with a delicious meal.

Tusnelda eats her burger while she curiously follows the cosplayers’ discussions.

She is contacted by a young guy who congratulates her on the first prize.

He’s a little too chubby to be in the handsome category and he’s not particularly dark either, so Tusnelda talks casually with him.
Here she feels completely out of the reach of divination.

When Trix finally finds Tusnelda again, she stands completely engrossed and watches a singer. She has seen her before at the Spice Festival.

Nope! Tusnelda has discovered the guy from Festival Square.

Tusnelda introduces herself and the guy introduces himself as Rasmus.
They agree to have a drink together.

It is always nice to meet new people, says Tusnelda as she greets the young woman to her right. Her name is Dina.

It’s really surprising how confident Tusnelda suddenly is.
Maybe it’s the first prize or Rasmus’ appearance that makes her lower all parades?
Tusnelda speaks cheerfully and confidently until she is interrupted by an annoyed meow.

Hey Trix! says Tusnelda cheerfully. I promise you we’ll go in a minute.

Why does Trix get a feeling that it’s not going to happen?

Tusnelda just wants to go to the toilet which makes Trix give up.

He finds himself a soft carpet where he can take a nap.

An hour later we find Tusnelda at the bar still in cheerful company.

She has just ordered another drink when Trix wakes up to deeds.
He howls loudly for attention.

Trix once again tries to call attention to himself.

He roars a resounding insistent Meoooow!

Trix looks strictly at Tusnelda … is it really necessary to ask that question? We can start with my food bowl and …

The talk continues unabated in the background.
Flora seems to be having a great time today.

But Tusnelda has finally got the point … it’s time to break up.

Trix examines her a little hesitantly … is she annoyed? He bothers to know what she’s thinking?

Finally at home by the feeding bowl.
Tusnelda says that this is probably the last time she takes Trix to GeekCon.

Will you promise me? purrs Trix satisfied.

Tusnelda turns on her television and zaps unconcentrated between the channels.