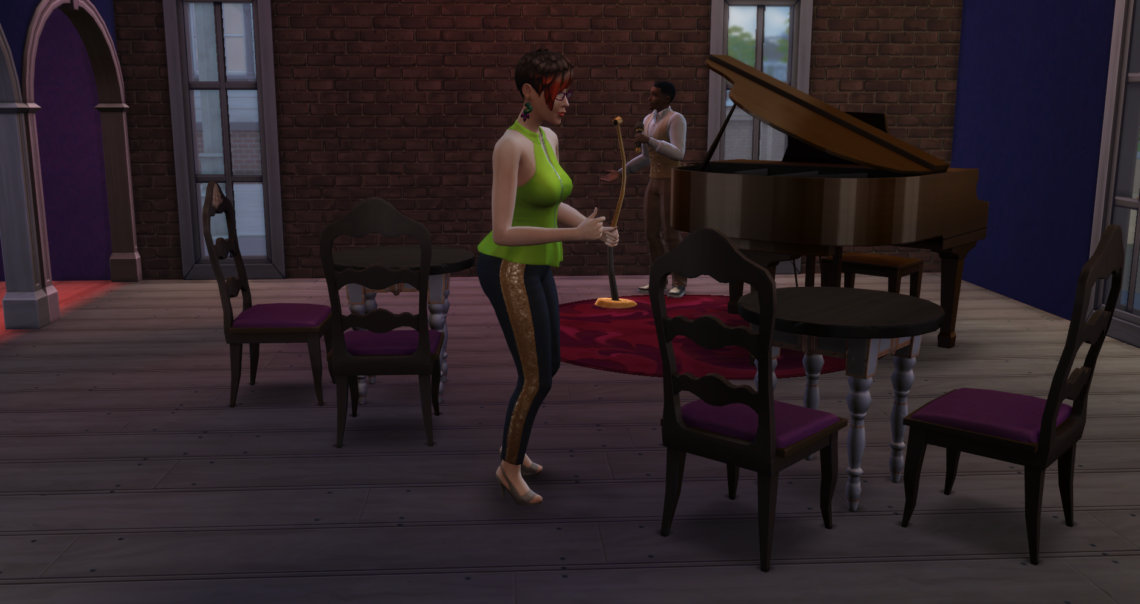 I worry a bit about sharing this section after some of my readers have described Rasmus as a creepy stalker. Maybe they am right?
In this section we will see more about Rasmus… A lot more!
Once again, I have not been able to limit my pictures..
Well then …. We’ll see how it goes.

I’m so glad you texted me Rasmus! I have never been to a nightclub before says Tusnelda enthusiastically.

One time must always be the first answer Rasmus relaxed.

After a few glasses of nectar, Tusnelda has forgotten her skepticism about strangers and she enthusiastically talks about her work and her interest in science and herbs.

Rasmus is a man of few words and he listens more than he tells about himself.

Suddenly he gets up and looks at Tusnelda.
Come let’s dance!

Tusnelda tries with some uncertain dance steps while Rasmus without inhibitions seems to have forgotten everything around him.

Tusnelda watches him from a distance.
This has been a day full of surprises.

Later when they get tired of dancing, Tusnelda picks up some tapas and another glass of nectar.
She enjoys the music and all the merry people in the room.

Rasmus is tired and he wants to leave. He kindly asks if he should follow Tusnelda home.

No thanks, I’m an adult woman I manage, Tusnelda replies with confidence as she scans the room.
It’s not dark yet and she wants the party to go on forever.

A little later as she sits alone she is hardly so sure.

She greets in surprise a guy entering the room. She’s seen him before. It’s Flora’s admirer from Sakura Festival.

Tusnelda is not allowed to sit alone for long and she is joined by a very handsome guy. He suddenly reminds her of a prediction.
Tusnelda feels the insecurity creep back into her body.

It does not get any better when Flora’s admirers start talking to her.

Tusnelda apologizes. “It has been really nice talking to you but I have to go home and look after my cat”.

A truly elegant retreat Tusnelda. He must think you’re a nut.

Trix has really missed Tusnelda and he eagerly meets her.

Ugh! She smells horribly of nectar and her voices sound too exalted and strange.

Trix looks at her closely. Apparently she’s not annoyed anymore.

Tusnelda is completely exhausted and staggers straight to bed.

Tusnelda does not sleep long the next morning.

The night’s experiences have whetted a healthy appetite and she feels inspired to try a new recipe for French Toast.

Tusnelda looks thoughtfully at her own reflection in the mirror. She knows she’s not beautiful and maybe it does not help her appearance with her penchant for gourmet food?

Then she takes a few gentle dance steps.

Why should she not enjoy life?
That night at the nightclub has opened a new world of partying and dancing joy.

She has just dreamed herself completely away in a pirouette as it knocks on the door.

Flora never arrives so early in the day. Who can It Be?

Rasmus?! What a surprise!

Tusnelda stares a little dreamily into the air without her being able to find words.

It’s not necessary either, because Rasmus is quietly starting to talk about himself.
He tells he has just moved to Brindleton Bay to look for work and that he shares a house with his childhood friend Martin.

Please tell me something more about Brindleton Bay, says Tusnelda enthusiastically.
She and Trix have been to the beach and she loves the sea and the beautiful nature.

Later, Tusnelda has become a lot wiser about Rasmus’ life as Trix chooses to interfere in the conversation.

Rasmus contemplatively watches Tusnelda scratching Trix on his soft belly.
I also have a cat … her name is Brooke tells Rasmus.

Is that right!? exclaims Tusnelda surprised. I love cats!

Well Trix does not quite know what to think about that love right now … He can feel that Tusnelda has already lost interest in his presence.

That guy really understands taking his place at all points, Trix thinks angrily.

Tusnelda and Rasmus continues to share experiences yet awhile…

… then Tusnelda gets up. She have to look after her crops.

Tusnelda whistles and waters her plants while Rasmus stays seated in his own thoughts.

Suddenly he gets up and leaves.

See you, Tusnelda shouts after him.

Hey Trix! Why did you suddenly get so busy?

Come let’s play with the feather duster you love!

Mind your own business, Trix snarls as he runs off.

Tusnelda stands back and wonders.

Trix has a very specific purpose …

… but not even his food bowl can she provide anymore. What a disappointment.

Trix has never asked for these changes and now she can see if she can do without him.

Where are you going Trix !?

Rasmus! Nice to see you again says Tusnelda as she gives him a big hug.

Rasmus does not hope he intrudes, but he would like to take a closer look at Tusnelda’s kitchen garden … he is considering planting some vegetables.

You are always welcome, Tusnelda answers … but at the same time she catches sight of Trix returning home from his excursion.

Where have you been all day? asks Tusnelda.
I filled your food bowl and you did not touch a single bite?

Food bowl!… Sorry, I have no time to listen ….
There he gained his speed.

You are welcome to look at the garden while I prepare the dinner, says Tusnelda welcomingly.
Afterwards we can eat together and I can answer your questions.

At the garden gate, Trix considers whether to resume his escape.

Then he sits down and considers his options while watching Rasmus from a distance.

In the mine, Tusnelda is ready with dinner.

Above ground, Rasmus tries to flatter Trix.
He’s talking about Brooke and Martin’s cat Fiona … maybe they can get to know each other on occasion?

Does that mean you keep coming back? Trix thinks as he sees Rasmus enter the house.
He assume this means that he must try to get used to the fact that time has changed.

Even though times have changed, something is still as it used to be.

Hi Flora! How nice to see you, says Tusnelda happy.

Soon Rasmus joins the small group.
Have you and Flora met before, Tusnelda asks.

You’re Flora? I’ve heard you’re a true virtuoso when it comes to plants, says Rasmus with no hidden admiration.

Isn’t life amazing? asks Tusnelda.
Before I was sad about my life in the dark mine and here I am now with two dear friends.

Later, when Rasmus is gone, Tusnelda and Flora lie in the grass and look up at the night sky while Tusnelda eagerly points at the stars.
Do you ever think about what’s hiding up there? asks Tusnelda.

Flora does not answer so Tusnelda continues to dream in silence until she retires to go to bed.

On reflection, Flora’s focus is probably most on what grows on the Earth.

Trix has finally decided that the best sleeping places can be found here at Tusnelda, so the escape has been forgotten until further notice.

Hm! Tusnelda does not appear to have reached her bed tonight.