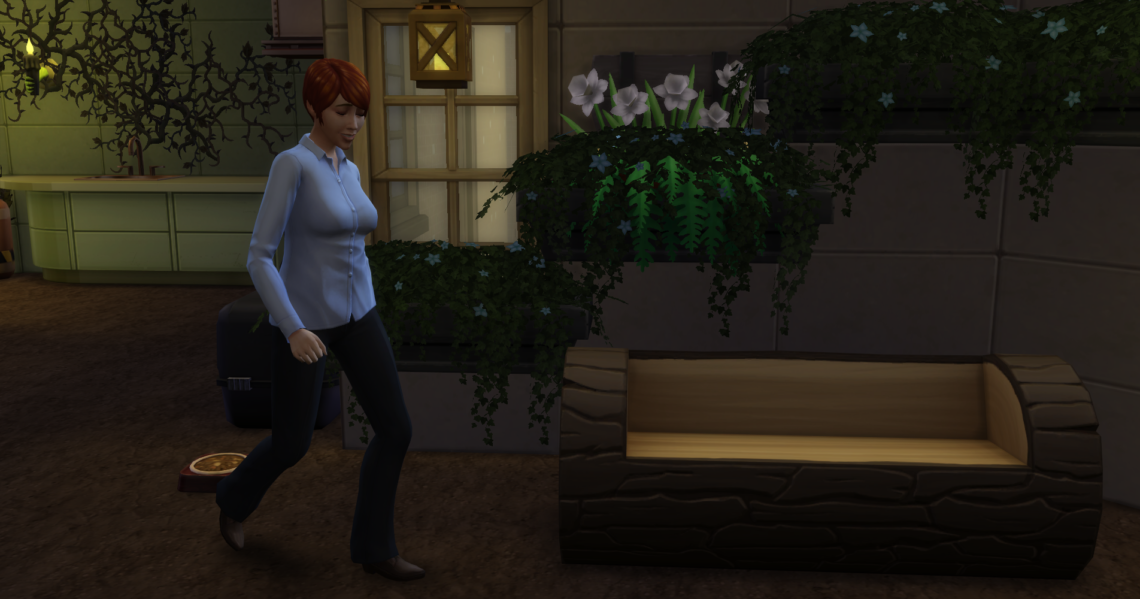 Tusnelda starts her morning routine in the garden. The plants have grown well and they have started to bear fruit and berries.

Tusnelda gives Trix a little cuddle. Trix sneaks lazily and comfortably on the sofa. He has gradually become comfortable in their home.

Tusnelda continues to read in the book about vampires for the next few hours. She gets a lot of new knowledge. She is both curious and inquisitive.

Tusnelda has found a machine in one of the mine tunnels. Here she experiments with extracts and chemistry. The science has always interested her.

Suddenly it’s afternoon and Tusnelda has to start her new job.

Trix looks surprised at the large garlic wreath on the wall. What has Tusnelda come up with now!? What benefit should it do?

There are so many of Tusneldas chores that he does not understand … now he might as well take a good long nap.

It gets dark before Tusnelda comes home again.
Sorry you’ve been waiting so long, Trix! I hope the garlic wreath has kept the vampires away.

Trix looks surprised at Tusnelda. Has she not herself told that the vampires are extinct!? ….More importantly, he is hungry and in need of fresh food.

That’s exactly what Trix brings to the pitch, because both his toilet and his food bowl need fresh supplies.

Once Tusnelda has taken care of Trix’s needs, it’s time to eat a quick sausage dish.

Finally she can find her bed.

Everyday life has begun and new mornings are coming where Tusnelda looks after her garden.

The plants thrive under her careful care.

At the inn, Tusnelda has discovered new dishes and food knowledge has become her new interest.

Now Trix thinks the TV must be enough !! … He longs to put claws and teeth in that fluttering shabby red object Tusnelda holds in her hand.

Tusnelda give Trix a hug. I know I neglected you Trix…. I have a few days off, so tomorrow you and I will go on holiday together.