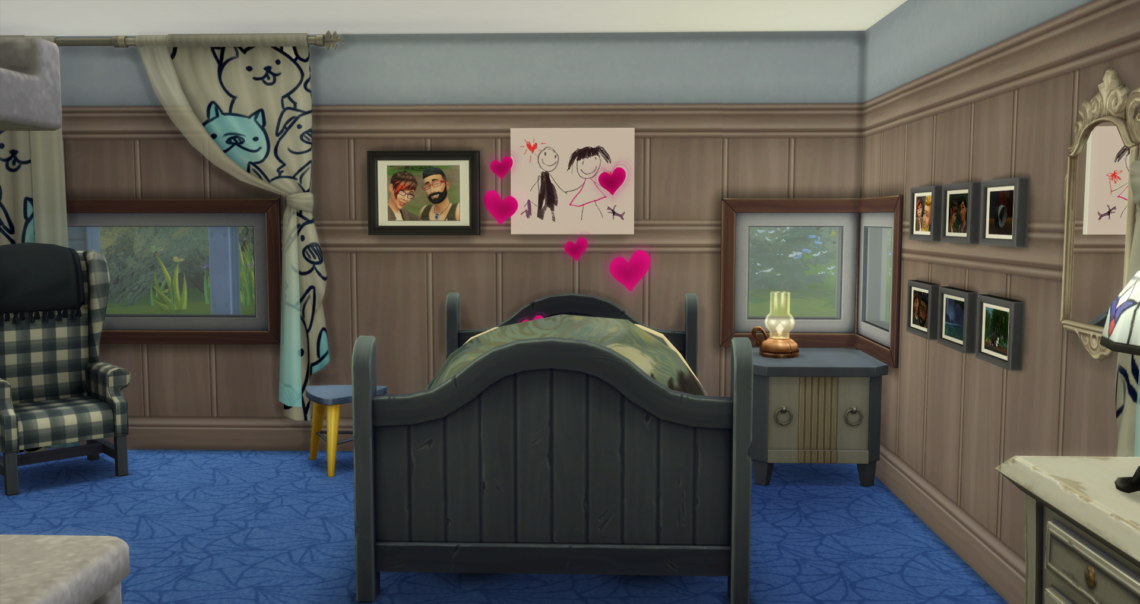 If you have ever tried to put two cats that do not know each other together, then you will know that it involves a lot of hissing, growling and lots of patience. Besides hissing, this chapter also contains a lot of red (hearts) and a large amount of pictures.
Let’s see how it goes by the newlyweds and their beloved pet.

Martin has moved into the house and I should not be able to tell what was most important for him to bring.
Either it’s his treadmill or it’s his cat Fiona.

Now that I mention Fiona … where is she?

Aha! In search of a squirrel….

It seems she has at least one interest in common with Trix.

Let’s follow her so we can get to know her better.

Trix also loves to rummage in piles of rotten seaweed. Another common interest.

I think those are good signs.

It seems that Fiona has found a treasure.

Fiona places her gift by the house wall and she immediately runs off again leaving a cloud of smelly perfume.

On the treadmill, Martin also sends out smelly clouds. He might well need a shower.

In the meantime, we can try to find Trix and Tusnelda.

Trix !? What happened to you!? …. Have you been hunting a squirrel again?

“No! I swear I did not hunt squirrels… It just came out of nowhere and jumped right in my head”…
“But please, do not say anything to Tusnelda… I fear the vet and the cone of shame”

After all, it will be Tusnelda who saves Trix out of his pain as she gives him one of her healing treats.

Tusnelda gives Trix a hug and admonishes him to avoid squirrel hunting in the future. Squirrels are full of fleas and diseases.

Now when Trix is relieved of his torment, he does not want to come up with any excuses. After all, he has avoided the vet, so he only answers Tusnelda with a grateful purr.

Martin returns fresh and clean from the shower. Now he stands and entices Trix with his wonderful sparkling feather duster.

“Let’s get started Martin! … why are you fanning the tassel up under the roof?” Trix replies with an eager meow.

Finally, it seems that Martin has grasped that a cat does not have wings …. although Trix can jump quite high.

Fiona returns home from her hunt and she immediately discovers the rainbow-colored sparks.

“What are you doing Martin!?” … “This is my toy and who the hell is this flea-infested nitwit?”

“I warn you!” Fiona hisses angrily. “I just broke the neck of a giant squirrel, so I have no problem beating a little pea like you!”

“Oops Martin! I think I’m done playing” Trix says, after which he hurries to turn his back to the problems.

Martin takes Fiona in his arms. “You two should be friends”

Tusnelda stands by their new barbecue in the garden, brewing an herbal extract.

When she gets inside, she finds Trix hiding at the top of the scratching tree.

Trix is not quite sure everything is ok and right now he is getting the hang of a hissing monster that is on its way.

There she is, the little devil. Now she’s about to charm his Tusnelda!

Tusnelda does not seem to sense uneasiness as the devil innocently falls asleep on his scratching tree! Trix sends her a warning hiss.

“You little fool … You two should really become friends” Tusnelda says as she gives him a hug. “Martin and I are going into town now, so behave nicely for so long”

Later in front of the Casbah Gallery in San Myshuno Arts Quarter.

“This is going to be a really exciting experience,” Martin says cheerfully.

In the basement, Adalyn Holton stands looking at a backdrop of a light-spotted beech forest.
Actually, she has bigger ambitions….. She would like to make a living from her abstract and artistic photo, but to supplement her income, she has to sell portraits.

The beech forest is beautiful, but today it is a wedding picture. She needs a more romantic background and red is the color of hearts and love.

“Hello and welcome to my studio!” says Adalyn welcomingly. “You can change at the clothes rack and then I’ll see you in a moment”

Meanwhile in Brindleton Bay, Fiona has woken from her slumber. Trix can feel her intense gaze in his neck.

“Please, do not kill me! I’m the one running now” he says sensibly.

For Adalyn, it’s about getting her clients to relax and find their best expression.

After a while, Tusnelda and Martin forget the unfamiliar situation and have a cheerful time together …

Adalyn comes up with encouraging suggestions and shoots picture after picture ….

Before you know it, at least fifty photos are in the box.

“Let’s try something else,” Adalyn suggests.

This time, Tusnelda and Martin take a seat on a red loveseat….

“You are so beautiful” whispers Martin

Adalyn looks at the sweet couple who now seem to have forgotten time and place.

She should definitely have chosen the red loveseat from the start …

Now for the last photo shoot…

At the same time in Brindleton Bay, Trix and Fiona have moved out to the garden table.

“Are you stalking me?” Fiona hissed angrily.

“Absolutely not!” Trix replies in horror … “I got to run now”.

Oh no Trix! Not the squirrel!

In the gallery bar, Tusnelda, Martin and Adalyn are about to end the day’s photo session.

Tusnelda quickly swallows her drink. She’s going to work in an hour.

Martin concludes the final appointments on when they can pick up their wedding picture.

Now that he’s come to the gallery, he might as well see the exhibits before heading home.

On the third floor, he finds a guitar. He should definitely acquire such an instrument as he cannot walk past a guitar without playing it. He looks like a professional artist in that suit.

Back home is the suit hanging in the closet and his workout clothes are back on.

“Hi Fiona, what have you been up to?” Martin asks with a twinkle in his eye.
Now he just has to finish his training and then he has time to play with her.

Oops! Revealed at the time of the crime!

However, Martin quickly forgets his anger when he hears his little kitten’s gentle meow.

She just needs a little attention.

Later, Martin finds Tusneldas book “The Psychology of Love” on the bookshelf.
It’s not because he has problems with love, but curiosity still makes him read on …. one can always get wiser.

Whatever the life coach message is, the subject seems to tire Martine as well as Tusnelda. Self-development can be an exhausting task.

Finally, Tusnelda comes home from work and she sees to her surprise Martin sleeping.

“Good morning your handsome guy, do you have sweet dreams?”

It’s hard to answer while kissing.

“I dreamed of you and me and a nest full of beautiful children” Martin replies in a moving voice.

Tusnelda laughs repulsively. “The children may well wait a little longer … besides, I’m afraid I’m going to be a terrible mother”

“On the contrary!” Martin replies in surprise … “I’m sure you’ll be a great mom! … besides, I’m right here by your side.”

In the end, no one knows what the future holds, but where love thrives, it can probably never go completely wrong.

The next morning Martin goes to work and Tusnelda prepares for a day at home.

Oddly enough, the laundry no longer seems so pointless now that she and Martin are a family. Strange thought.

Tusnelda takes a jog along the beach.

She makes a delicious vegetable quiche for lunch.

Tusnelda has bought new clothes … will he notice?

Martin will never turn down a date with Tusnelda, so they travel to a nightclub in Windenburg where the DJ has a good reputation.

Tusnelda sighs deeply “Martin, you are so seductive … my legs get completely gelatinous when you kiss me.”

“Let me see how gelatinous you can be” Martin replies and the next kiss almost makes Tusnelda faint in his arms.

“Maybe we should drop the dance and find a place where we can talk together in peace and quiet?”…

Martin is a loner and prefers small cozy places that are not too crowded.

Their conversation definitely seems to be going well.

In Brindleton Bay, Trix and Fiona have another type of silent conversation ….

Tusnelda opens the closet door ajar and scout out carefully, “I think there is a clear path now Martin” …. “I’m sure no one has discovered us.”

That may not be entirely true because immediately after, Martin is recognized…..

“Martin! What a surprise! I thought I probably recognized you coming out of the closet,” the guy says with a cheerful laugh.

Tusnelda has no idea where Martin and Joaquin know each other from, but it looks like they have a common past.

Tusnelda sits down, but it is not very entertaining to attend their conversation and Martin and Joaquin does not seem to notice her presence.

Look at him Joaquin Le Chien that braggart! … first he interrupts her date and then he shows up on the dance floor.

Tusnelda feels invincible and happy and no braggart should take that happiness from her.

“There you are,” Martin says …. “I have been looking for you”

“Do we still have a gelatinous deal?”

“You can bet we have” replied Tusnelda without words.

The time of miracles is not over and it finally seems that Trix and Fiona have found each other.

“Sorry guys! You will have to find another place, because we are going to use the bed.”

Martin has just been released from work.

He wants to take a short nap before Tusnelda comes home.

Shortly after, we find him on the treadmill.

Tusnelda has finally been released from the restaurant.

She is a prominent chef. She has reached the peak of her career and earns a good salary … but today she has made a new decision.

“Hello Sweetheart! How has your day been?” Martin asks attentive as always.

“I have quit my job” Tusnelda replies …. “but I have applied for another job and I will start tomorrow.”

“Oh! You got a new job? …. so I assume everything is fine” Martin replies optimistically.

“It’s going to be a life change but I’m happy” Tusnelda replies.

“Come with me and you can tell me all about your job change,” Martin whispers.

Tusnelda hardly gets time to give an answer…

… and I doubt they get to talk much about her working life tonight.

Well, this must be enough romance! I promise the next chapters will be about something completely different than Tusnelda and Martin’s love life.

Maybe there are still some who are curious about how things are going with Trix and Fiona?

The hissing is over and they get along quite well….

Some say red hearts are the symbol of love.

In this chapter I needed a top skill photographer and I have found Adalyn Holton made by IslaRoses in the gallery. Sorry, I’m unable to retrieve a link.
When I wrote Adalyn shoot at least fifty pictures it is no exaggeration. I have no mods to create poses in my game and it took a lot of effort to get the couple to position themselves where they were supposed to. However, the camera from the Moschino package gave me some opportunities that made this project a success in the end.