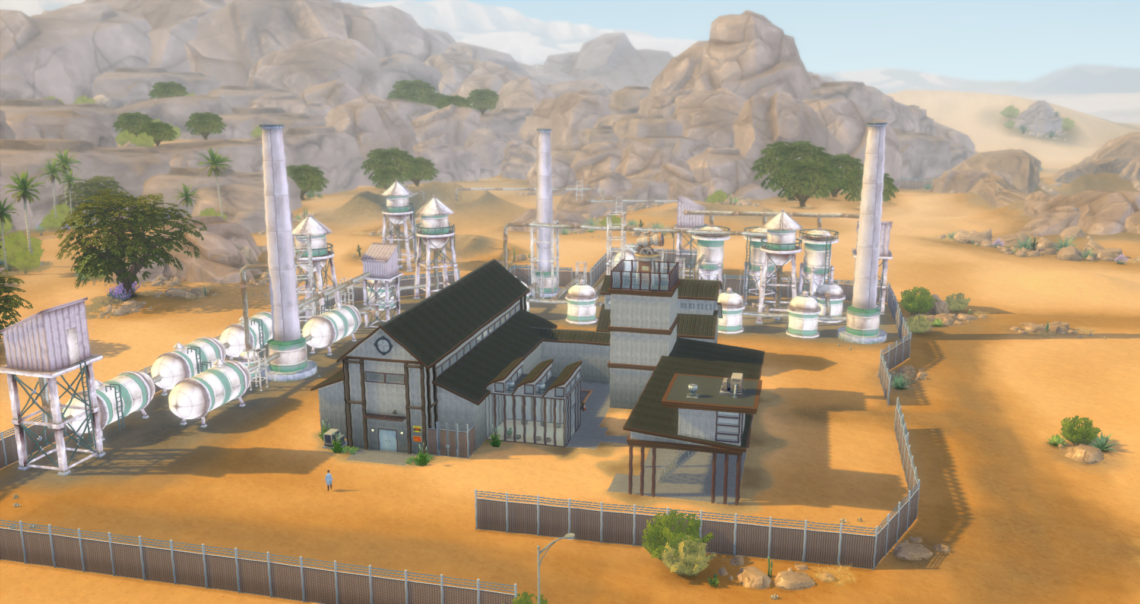 In today’s chapter we follow for the first time Tusnelda on her new work.
It will be a day of unforeseen challenges and Tusnelda must realize that she may not be quite as skilled as she first assumes.
Martin offers his assistance to make Tusneldas end of the day happy.

Tusnelda has been looking forward to her first day in the new job, but now she hesitates for a moment when she sees the huge building.

She has never been to this part of the country before. The Scientific Laboratory is well hidden in the edge of the desert.

Shortly after, she boldly walks through the large entrance gate.

At the front desk, she nods briefly to the receptionist. There’s something familiar about that guy but right now she can not place him.

This is the first time that Tusnelda goes down the long empty corridor. There are only two doors to lead her on and she chooses the door on the left.

In the next room she catches sight of a guy with a long multi-colored hair.

“Hey! You must be Tusnelda?” greets the guy welcoming.
“I’m Simon and I’m going to give you an introduction to your new workplace.”

“Let’s get started, I have been looking forward to this moment” Tusnelda replies impatiently.

First, Tusnelda is introduced to Aarav. He is the center’s security chief and acts as day – to – day manager

“Let me introduce you to Kristina” … “She will give you some crystals and show you how to use the Chemical Analyzers to perform analyzes.”

Tusnelda replies that she can easily do without help and she immediately reaps a disapproving eyebrow from Kristina. Oops! wrong tactic.

Aarav is sure that Tusnelda will do just fine … but here they all follow some safety procedure and and one must show that they have basic skills before they can get a bigger task.

Tusnelda has no more objections right now and she starts analyzing after expert guidance.

She instructs Tusnelda in which plant extracts she should use and how they should be mixed to make a Synthetic Food Serum.

This is annoying … do they think she’s a child?

Tusnelda is a trained chef. She can easily understand a recipe, she has long known how to make healthy treats for Trix and she can use a Chemistry Lab.

Tusnelda can feel how her anger grows.
Why the hell did that serum fail, now when she wants to prove she’s a talented scientist?

Kristina shows Tusnelda the way to the staff room, where they can have their lunch.

While eating, the mood is strained. Tusnelda feels Kristina’s disapproving look and feels the shame burning in her cheeks. Kristina is apparently not convinced of Tusneldas qualities.

After lunch, luckily it’s time for other tasks.
Tusnelda is researching the big machine she will need to develop scientific devices.

Luckily, it’s Simon who has to instruct her.
Right now she is best at keeping her distance from Kristina.

“How did you handle the Synthetic Food Serum?” Simon asks her.

“If you fall off a horse, you have to get on it right away … which means you have to make a new serum before I show you the Invention Constructors functions,” says Simon.

Tusnelda stares angrily after Simon as he leaves … why should they all talk to her like she’s a child.

Hey! Do not send me that look Tusnelda! … I’m just the woman telling your story. The rest is up to you.

A little later, a bang sounds as the whole attempt explodes between Tusneldas hands.

Fortunately, Tusnelda was not injured. Apart from a little dizziness, she is completely unharmed.

After the recent accident, Aarav finds it wisest to let Tusnelda gather some focus at the Invention Constructor. Hopefully she can gather some breakthroughs.

Here, Tusnelda later gets her next assignment. She must make a momentum conserver.

Tusnelda throws herself eagerly over the task … it seems to be going very well. The Invention Constructor follows all her instructions.

I did it! Tusnelda thinks triumphantly and she is just about to erupt a howl of joy ….

Oh no! The howl of joy is replaced by a cry of terror.

Will anyone find a fire extinguisher!

Fortunately, the fire burns out quickly, without Tusnelda suffering any damage other than a soot-stained smock.

“Why did you do that? You pathetic robot!” Tusnelda shouts angrily.

There are no colleagues nearby so Tusnelda escapes their indignant glances this time.
Now she just has to find the bathroom …

Tusnelda decides to ask the receptionist about where she can find the bathroom….

“You should not know anything about Forgotten Hollow, should you?” Tusnelda asks tensely.
She knows she’s seen that guy before.

“Get lost your insane woman !!” hisses the receptionist angrily.

Tusnelda is about to give him an angry answer when the four o’clock bell rings.
It’s time to go home.

It was probably at the last minute that the working day ended before Tusnelda made another scandal. Unfortunately the day turned out to be far from what Tusnelda dreamed of.

“Hello Sweetheart! How was your day?” Martin asks attentively.

“I don’t want to talk about it! … I will go to the bathroom and to bed” Tusnelda snarls.

Trix stares at her as he sees a ghost.

“Hey Trix, we’d better give her some space,” Martin says.

Luckily, Martin has another sweet girl in the house, who will never snarl at him.

Martin finds his treadmill. It helps him remove the tension. He always relaxes after training hard.

Fiona tries to get his attention. When it comes to love, there is often someone who longs in vain.

It gets dark before Martin finishes training and he turns inside to take a shower.

First task is the bathroom.

Martin sits down on the edge of the bed..… What has happened since his beautiful devoted wife has turned into a snarling Valkyrie?

Perhaps it is Martin’s presence that awakens Tusnelda from her sleep.
She sees him sitting and staring thoughtfully into the room.

“How was your day?” Martin asks cautiously. “You know I love you and you can really tell me everything”

“My day has been awful … my scientific assignments failed all the time and I made a terribly embarrassing figure to my colleagues … and then I recognized this guy from Forgotten Hollow who gave me all these bad chills.”….

“But I should not let it go beyond you” says Tusnelda with a sigh.

“Maybe I could practice a little magic and help you get a sparkling end to your day,” Martin whispers.

“When it comes to magic, you will definitely always be my favorite magician” Tusnelda replies with a laugh.

In fact, I would really like to see some stars with you.

The moon and stars stands high in a cloudless sky and promises peace and harmony.

Maybe it was in fact not these stars Martin had in mind….

… but when it comes to love, the recipe is to give more than one takes.

After all, it turned out to be a peaceful end to the day.

I did it again! …… It is obviously the fate of an author to receive hateful glances.

I take full responsibility for not giving Trix the place in history he deserves. Hopefully it gets better in the next chapter.