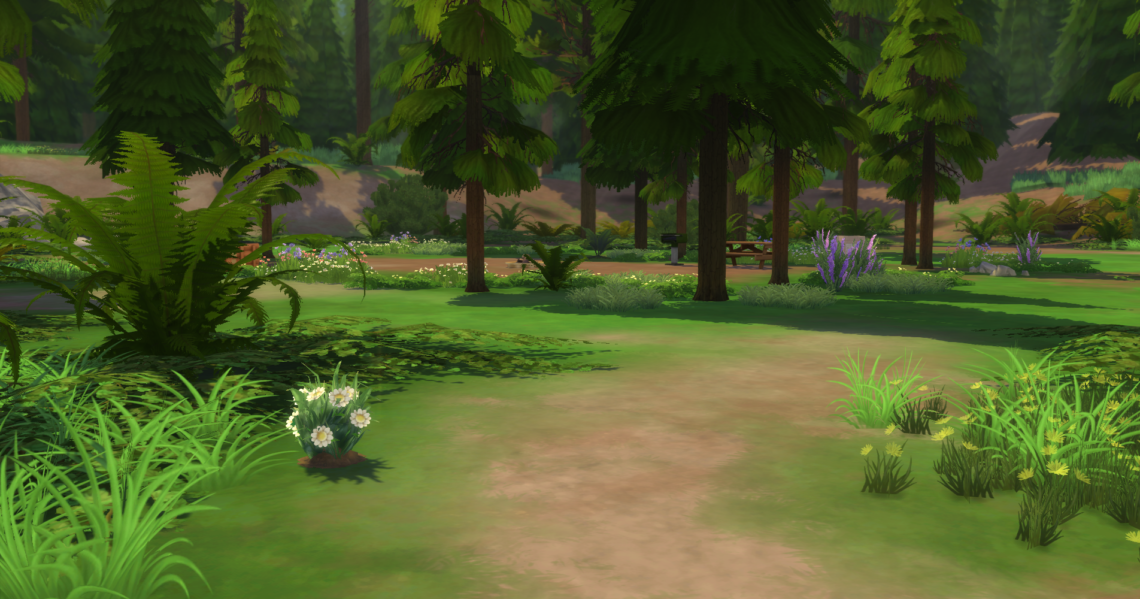 Welcome back to a new day.

Tusnelda eats her breakfast while watching her favorite show on TV. The cooking contest. In addition to the excitement of which team wins the competition, she learns many great cooking tips while watching the program.

Tusnelda looks at Trix. He is still sleeping heavily, tired on top of the many impressions from yesterday’s adventures.

Outside, the views are breathtaking. The air is fresh and the sky is bright and clear.

Exactly the right weather for fishing.

It is part of Tusneldas goal to catch several different types of fish and here she got a nice Yellow Perch on the hook.

Trix has finally finished sleeping and he goes exploring in the woods.

Suddenly he looks up in surprise….

This man is definitely not a cat lover!

He is really ill-mannered! … Get lost! hisses Trix, otherwise I will ….

Well! We never get an answer to what Trix has in mind for the man disappears in a hurry.

Elsewhere in the forest, Tusnelda is collecting berries and herbs.

Now she just has to decide their nature and application.

This must be elderberry.

When she tries to catch some bees it ends up she gets stung. Ouch!

When Trix returns home to the cabin, Tusnelda is cooking a herbal lotion.

A small sprinkle of elderberry and …

Trix takes a well-deserved rest while Tusnelda finishes brewing Sadness Alleviation Lotion.
The lotion can be quite useful in the future.

In the late afternoon sun, Tusnelda finds a quiet nook where she can read in the book on herbalism.

She realizes that she still has a lot to learn.

Tusnelda tastes another herb, but this herb is bitter and she can not determine its species.

Trix has found another quiet hook.

After a little grooming, it’s time for another nap.

Tusnelda is on her way to the cabin when she sees a park ranger walking towards her.

He is actually very accommodating and welcomes her into the woods.

When Tusnelda returns to the cabin, she will light a fire and it is close to ending in an accident.

She luckily escapes unharmed and now she wants to try out a recipe from the book…. Roasted beetles.

Tusnelda looks at them with skepticism … they do not look very appetizing. Maybe they should be toasted a little longer?

They smell quite delicious.

Soon she eats the small meal with great relish.

Elsewhere in the forest, a ghost lit a fire and set herself on fire…

The crazy ghost puts out the fire and the whole process repeats itself over and over again.

It all takes place close to Trix’s sleeping place and he quickly takes flight…. I’m gone here before the crazy ghost is setting half the forest on fire!

Now he needs to be comforted by Tusnelda.

Tusnelda is happy to see her friend and she starts on a long story about everything she has experienced.

Trix listens patiently, he himself has experienced several adventures he would like to tell her about.

Tusnelda sits down and stares thoughtfully into the fire while Trix eagerly chases his own tail. Tomorrow they are going home for everyday life.

The darkness envelops the trees. Soon it’s time to say goodbye to the cabin and the adventure in the woods.